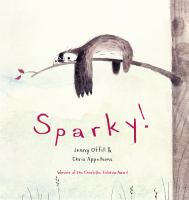 A child takes a sloth named Sparky as a pet.

*Starred Review* Here's how it starts:"I wanted a pet." The narrator's mother agrees, "as long as it doesn't need to be walked, bathed or fed." A librarian helps narrow her choices to a field of one: "Sloths are the laziest animal in the world." After its arrival, our narrator hopefully names her sloth Sparky, but alas, he is as described in books. Sparky's owner doesn't mind too much until provoked by überachiever Mary Potts, who informs her that not only does she have a cat that dances but also a parrot that knows 20 words. What's a sloth owner to do? Put on a show, promising "countless tricks" from Sparky! One of the wonderful things about this book is that there is no surprise ending. A sloth is a sloth. The show is as deadly dull as one would—or should—expect. But from that sad little event comes a moment of love so pure and elemental that it will affect readers of all ages. Offill and Appelhans have created quite a perfect package. The text is spare yet amusing and full of important messages presented in the most subtle of ways. Appelhans, whose career up to now has been in animated films such as Coraline, is a revelation. The enticing watercolor-and-pencil art, mostly in soft shades of browns and burgundies and featuring the artist's hand lettering, captures a range of emotions, at least from the humans. Furry, flat-nosed Sparky, on the other hand, just is, and that, as it turns out, is enough. Copyright 2014 Booklist Reviews.

Depending on one's feelings about exotic pets, Offill's (17 Things I'm Not Allowed to Do Anymore) sloth story is either hilariously hip or burdened with pathos. At the outset, a mother tells her daughter, "You can have any pet you want as long as it doesn't need to be walked or bathed or fed." Within these parameters, the girl acquires a sloth, dubbed Sparky. She tries to coax her low-maintenance pet to do tricks, but complains, "Sometimes he took so long to fetch that I went inside and had dinner while I waited." Appelhans, an animation illustrator, debuts with watercolors in driftwood brown, teal, and red; readers will detect Mac Barnett and Jon Klassen's influence in the palette and in Sparky's repetitive poses, dangling his arms from a branch or slouching upright. Offill and Appelhans's glum story recalls the absurdism of J. Otto Seibold's recent Lost Sloth. By book's end, both girl and sloth are just about as lonely and miserable as ever, but at least they're lonely together. Ages 4–8. Author's agent: Sally Wofford-Girand, Union Literary. (Mar.) [Page ]. Copyright 2013 PWxyz LLC

PreS-Gr 1—A persistent girl asks for a pet until her mother finally relents with a caveat: "You can have any pet you want as long as it doesn't need to be walked or bathed or fed." The school librarian leads the girl to the S volume of the animal encyclopedia, where she discovers the sloth, a creature that barely moves. When her sloth arrives, she names him Sparky, a moniker that suggests energy (unlike her new pet). The girl attempts to impose many un-sloth-like qualities on the quiet creature, playing several games with him that he is bound to lose (except for "Statue") and planning an elaborate Trained Sloth Extravaganza that is hardly eventful. While there are several attempts at humor in the text, ultimately this book is a little sad. The girl only reluctantly accepts that her pet sloth basically does nothing, and rather than embracing this quality, she finishes the book by starting a game of tag with her pet. Well-rendered watercolor and pencil illustrations in subdued hues of brown, green, and red depict a slight, spritely girl and an inexpressive sloth, and therein lies another problem with this book. Sloths are cute and huggable, but this one merely looks lost until the last page when he finally smiles a bit. For children interested in sloths, Lucy Cooke's A Little Book of Sloth (S & S, 2013) is a much better choice, and it includes a reminder that "sloths belong in the wild and should never be kept as pets." Additional.—Teri Markson, Los Angeles Public Library [Page 122]. (c) Copyright 2014. Library Journals LLC, a wholly owned subsidiary of Media Source, Inc. No redistribution permitted.

An animal-lover's picture book combines whimsical illustrations by the designer of the Coraline film with the story of a little girl who orders a pet sloth through the mail and finds reasons to love him despite his less-than-conventional behavior. By the award-wining author of 17 Things I'm Not Allowed to Do Anymore.

The ingenious author of 17 Things I'm Not Allowed to Do Anymore and a brilliant illustrator and production designer of the Coraline movie have created a hilarious, touching picture book perfect for young animal lovers. Like the Caldecott Medal-winning Officer Buckle and Gloria, Sparky stars a pet who has more to offer than meets the eye. When our narrator orders a sloth through the mail, the creature that arrives isn't good at tricks or hide-and-seek . . . or much of anything. Still, there's something about Sparky that is irresistible.Winner of the Charlotte Zolotow Award