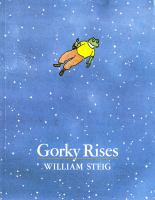 Clutching the bottle of magic potion he has made, a young frog falls asleep and wakes to find himself floating in the sky.

Clutching the bottle of magic potion he has made, Gerky, a young frog, falls asleep and wakes to find himself floating in the sky.

Gorky the frog makes a bottle of magic liquid with his chemistry set and, after he wakes from a nap, finds himself floating up in the air, traveling around the world

"One summer morning when his parents aren't about, frog Gorky sets up a laboratory in the kitchen and concocts a potion...His wondrous flight is described in language that bubbles with magical phrases, and the illustrations bloom with Steig's luminous art." --Starred, School Library Journal

One fresh and fair summer day, as soon as his parents go out, Gorky sets up his laboratory by the kitchen sink to have another try at concocting a magic potion. This time he strikes upon the missing ingredient--half a bottle of his mother's attar of roses--and he knows it's success at last.While he is waiting for the bubbly, glinting liquid to show what it can do, he heads over to Elephant Rock, "his best spot for doing nothing." But on the way he stops to bask in the sun, soon falls asleep--and wakes to find himself floating in the immensely blue sky, clutching his bottle of magic.There follows the most astonishing, bewildering, and bedazzling adventure a young frog could possibly have. Orbiting the globe has its ups and downs, however, and Gorky soon begins to wonder if he'll ever get back to earth. He does manage to outwit the magic; but the potion saves a last surprise until Gorky reaches Elephant Rock, just on day later than he had planned. Gorky Rises is a 1980 New York Times Book Review Best Illustrated Book of the Year, Notable Children's Book of the Year, and Outstanding Book of the Year.