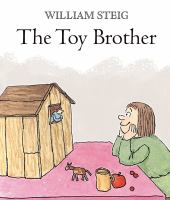 A rerelease of a picture book classic by the Caldecott Medal-winning creator of The Amazing Bone finds a pair of competitive brothers switching roles when the older plays with his alchemist father's potions and shrinks to a tiny size, forcing him to place his safety in the hands of the younger. Simultaneous.

An apprentice alchemist finds that his despised little brother is the only one who can help him when he concocts a potion which makes him the size of a peanut.

Yorick Bede has always considered his younger brother, Charles, a first-rate pain in the pants, and Charles thinks the same of Yorick. One day Yorick plays with his alchemist father's potions, and he accidentally shrinks himself to the size of a cockroach. Now suddenly Charles is the big brother. Though it's tempting to leave Yorick as a shrunken version of himself to teach him a lesson, Charles and the rest of the Bede family protect Yorick and tinker with more and more potions until they find the right one to bring back him back to his normal size.