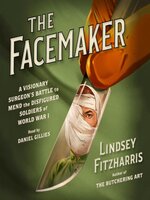 "Enthralling. Harrowing. Heartbreaking. And utterly redemptive. Lindsey Fitzharris hit this one out of the park." —Erik Larson, author of The Splendid and the VileLindsey Fitzharris, the award-winning author of The Butchering Art, presents the compelling, true story of a visionary surgeon who rebuilt the faces of the First World War's injured heroes, and in the process ushered in the modern era of plastic surgery. The audiobook is read by actor Daniel Gillies who is the great, g...reat nephew of the pioneering surgeon, Harold Gillies. From the moment the first machine gun rang out over the Western Front, one thing was clear: mankind's military technology had wildly surpassed its medical capabilities. Bodies were battered, gouged, hacked, and gassed. The First World War claimed millions of lives and left millions more wounded and disfigured. In the midst of this brutality, however, there were also those who strove to alleviate suffering....