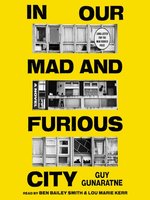 In Our Mad and Furious City A Novel

"Narrators Ben Bailey Smith and Lou Marie Kerr expertly intertwine multiple first-person points of view in this gritty debut audiobook...Listeners unfamiliar with the dialects — Irish, Jamaican, and British among them — will be especially buoyed by the power of the performances." — AudioFile Magazine, Earphones Award winnerLong-listed for the 2018 Man Booker PrizeShort-listed for the 2018 Gordon Burn PrizeInspired by the real-life murder of a British army soldier by religious fan...atics, and the rampant burning of mosques that followed, Guy Gunaratne's In Our Mad and Furious City is a snapshot of the diverse, frenzied edges of modern-day London. A crackling debut from a vital new voice, it pulses with the frantic energy of the city's homegrown grime music and is animated by the youthful rage of a dispossessed, overlooked, and often misrepresented generation.While Selvon, Ardan, and Yusuf...