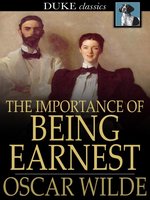 The Importance of Being Earnest A Trivial Comedy for Serious People

The Importance of Being Earnest is the last play Oscar Wilde ever wrote, and remains his most enduringly popular. It makes fun of social graces in the late Victorian era. Two seemingly unrelated parties are thrown into ridiculous entanglement when their fake identities, maintained in order to escape social responsibilities, grow ever more complicated to uphold.