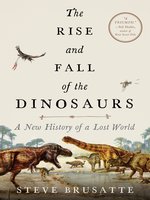 "THE ULTIMATE DINOSAUR BIOGRAPHY," hails Scientific American: A thrilling new history of the age of dinosaurs, from one of our finest young scientists. "A masterpiece of science writing." —Washington PostA New York Times Bestseller • Goodreads Choice Awards Winner • A BEST BOOK OF THE YEAR: Smithsonian, Science Friday, The Times (London), Popular Mechanics, Science News"This is scientific storytelling at its most visceral, striding with the beasts through their Tri...assic dawn, Jurassic dominance, and abrupt demise in the Cretaceous." —NatureThe dinosaurs. Sixty-six million years ago, the Earth's most fearsome creatures vanished. Today they remain one of our planet's great mysteries. Now The Rise and Fall of the Dinosaurs reveals their extraordinary, 200-million-year-long story as never before.In this...