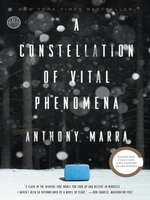 A Constellation of Vital Phenomena A Novel

NATIONAL BESTSELLER • WINNER OF THE NATIONAL BOOK CRITICS CIRCLE'S JOHN LEONARD AWARD • LONGLISTED FOR THE NATIONAL BOOK AWARDNAMED ONE OF THE TEN BEST BOOKS OF THE YEAR BY THE WASHINGTON POST AND ONE OF THE BEST BOOKS OF THE YEAR BY The New York Times Book Review • San Francisco Chronicle • New York • Chicago Tribune • Kansas City Star • GQ • NPR • Christian Science Monitor • Cleveland Plain Dealer In a small rural village in Chechnya, eight-year-old Havaa watches from ...the woods as Russian soldiers abduct her father in the middle of the night and then set fire to her home. When their lifelong neighbor Akhmed finds Havaa hiding in the forest with a strange blue suitcase, he makes a decision that will forever change their lives. He will seek refuge at the abandoned hospital where the sole remaining doctor, Sonja...