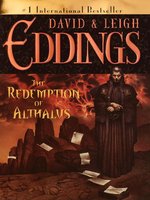 The Redemption of Althalus

David and Leigh Eddings were mythmakers and world builders of the first order. With The Redemption of Althalus, the authors of the Belgariad and Malloreon sagas created a thrilling stand-alone epic—boldly written and brilliantly imagined.It would be sheer folly to try to conceal the true nature of Althalus, for his flaws are the stuff of legend. He is, as all men know, a thief, a liar, an occasional murderer, an outrageous braggart, and a man devoid of even the slightest hint of honor. Yet of ...all the men in the world, it is Althalus, unrepentant rogue and scoundrel, who will become the champion of humanity in its desperate struggle against the forces of an ancient god determined to return the universe to nothingness. On his way to steal The Book from the House at the End of the World, Althalus is confronted by a cat—a cat with eyes like emeralds, the voice of a woman, and the powers of a goddess. She is Dweia, sister to The Gods and a greater thief...