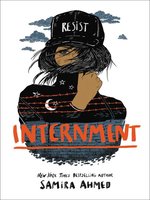 An instant New York Times bestseller!"Internment sets itself apart...terrifying, thrilling and urgent."—Entertainment WeeklyRebellions are built on hope.Set in a horrifying near-future United States, seventeen-year-old Layla Amin and her parents are forced into an internment camp for Muslim American citizens.With the help of newly made friends also trapped within the internment camp, her boyfriend on the outside, and an unexpected alliance, Layla begins a journey to fight for freedom..., leading a revolution against the camp's Director and his guards.Heart-racing and emotional, Internment challenges readers to fight complicit silence that exists in our society today.