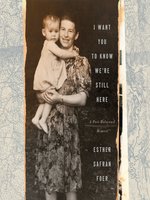 NATIONAL JEWISH BOOK AWARDS FINALIST • “Part personal quest, part testament, and all thoughtfully, compassionately written.”—The Washington Post “Esther Safran Foer is a force of nature: a leader of the Jewish people, the matriarch of America’s leading literary family, an eloquent defender of the proposition that memory matters. And now, a riveting memoirist.”—Jeffrey Goldberg, editor in chief of The AtlanticNAMED ONE OF THE BEST BOOKS OF THE YEAR BY NPR Esther Safran Foer g...rew up in a home where the past was too terrible to speak of. The child of parents who were each the sole survivors of their respective families, for Esther the Holocaust loomed in the backdrop of daily life, felt but never discussed. The result was a childhood marked by painful silences and continued tragedy. Even as she built a successful career, married, and raised three...