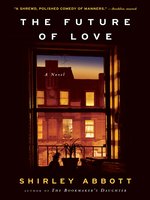 The Future of Love A Novel

"[An] impressive first novel . . . Abbott's nuanced take on New York after the fall is spot-on, reminding us that love is about survival as well as loss." —People Set in New York in 2001, Abbott's debut novel invites us into the lives of good people grappling with the hard choices and the sacrifices they must make to find love. In the manner of a contemporary Edith Wharton, Shirley Abbott exposes the inner lives and the tangled relationships of eight characters—before and... after New York's tragedy—and forces both them and the reader to see the world in a new way. Having assembled a smart, compelling ensemble, reminiscent of HBO's Six Feet Under, Abbott allows us to see the possibility of happiness even as the city itself is tested. With humor and profound empathy, she has crafted a novel that runs deep into the heart of our need for commitment from friends, lovers, and family.