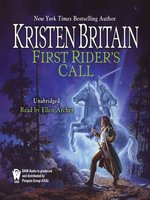 Second in the Green Rider series from the New York Times bestselling author of The High King's Tomb. Once a simple student, Karigan G'ladheon finds herself in a world of deadly danger and complex magic, compelled by forces she cannot understand, when she becomes a Green Rider-one of the magical messengers of the king. Forced to accept a fate she never would have chosen, she attempts to return to her life as the daughter of a wealthy merchant, but the magic in her blood is too strong. P...ursued by the ghost of the legendary First Rider, she rejoins the Green Riders to confront an ancient evil.