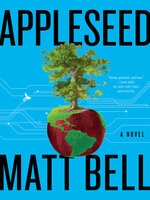 A NEW YORK TIMES NOTABLE BOOK · A PHILADELPHIA INQUIRER BEST OF THE YEAR"Woven together out of the strands of myth, science fiction, and ecological warning, Matt Bell's Appleseed is as urgent as it is audacious." —Kelly Link, Pulitzer Prize finalist and national bestselling author of Get in TroubleA "breathtaking novel of ideas unlike anything you've ever read" (Esquire) from Young Lions Fiction Award–finalist Matt Bell, a breakout book that explores climate ch...ange, manifest destiny, humanity's unchecked exploitation of natural resources, and the small but powerful magic contained within every single apple. In eighteenth-century Ohio, two brothers travel into the wooded frontier, planting apple orchards from which they plan to profit in the years to come. As they remake the wilderness in their own image, planning for a future of settlement and civilization, the long-held bonds and secrets between the two will be...