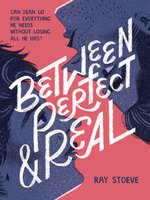 Between Perfect and Real

Dean Foster knows that heâs a trans man. He's watched enough YouTube videos and done enough questioning to be sure. But everyone at his high school thinks heâs a lesbianâincluding his girlfriend Zoe. Maybe he can just wait to openly transition until heâs off at college. Besides, he's got enough to worry about: Heâs cast as Romeo in the school play (in what the theater teacher thinks is an interesting gender swap), heâs falling in love with Zoe, and he'...;s applying to the NYU theater program. Itâs not everything, but itâs pretty good. But playing a boy every day in rehearsals, Dean realizes he wants everyone to see him as he really is nowâânot just on the stage, but everywhere in his life. Emboldened by stepping out on the stage as Romeo each day and the trans youth support group he's started attending, he knows what he needs to do. The only question remains: can he try to achieve everything he needs without losing all he has?