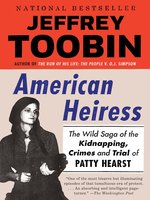 American Heiress The Wild Saga of the Kidnapping, Crimes and Trial of Patty Hearst

A National BestsellerFrom New Yorker staff writer and bestselling author of The Nine and The Run of His Life: The People v. O. J. Simpson, the definitive account of the kidnapping and trial that defined an insane era in American historyOn February 4, 1974, Patty Hearst, a sophomore in college and heiress to the Hearst Family fortune, was kidnapped by a ragtag group of self-styled revolutionaries calling itself the Symbonese Liberation Army. The weird turns that followed in this already sensation...al take are truly astonishing—the Hearst family tried to secure Patty's release by feeding the people of Oakland and San Francisco for free; bank security cameras captured "Tania" wielding a machine gun during a roberry; the LAPD engaged in the largest police shoot-out in American history; the first breaking news event was broadcast live on telelvision stations across the country; and then there was Patty's...