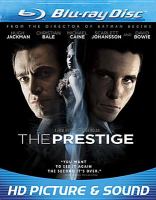 Set against the backdrop of turn-of-the-century London. Two magicians share an intense rivalry with each other and leads them on a life-long battle for supremacy. The rivalry is so intense that is will be full of obsession, deceit and jealousy, with both dangerous and deadly consequences. From the time that Robert Angier and Alfred Bordon first met, the two were competitors. However, their once friendly competition evolves into battle for each other's trade secrets.