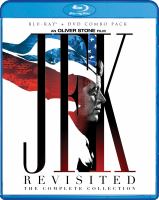 JFK revisited Through the looking glass

Thirty years after his renowned film JFK, Oliver Stone takes viewers on a thought-provoking and eye-opening journey through recently declassified evidence in the assassination of President John Fitzgerald Kennedy. Subjects covered include the early formation of President Kennedy's foreign policy overview and his anti-colonial convictions, which put him in opposition to the Eisenhower administration, the CIA, and the Pentagon.