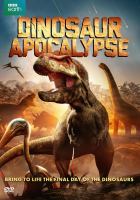 Sixty-six million years ago, a gigantic asteroid slammed into Earth, wiping out the dinosaurs. There's strong evidence of the asteroid impact, but no fossils of a dinosaur killed in the event have ever been found. Now, at a dig site in North Dakota, scientists have uncovered a wealth of fossilized creatures that could reveal a more detailed picture of the devastating day the asteroid hit. Following a trail of remarkably well-preserved fossils, including a pterosaur embryo in its shell and a... dinosaur leg with its skin intact, Sir David Attenborough guides us on a search for clues that could provide an unprecedented snapshot of what happened on the unluckiest day of life on Earth.