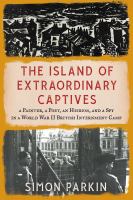 The island of extraordinary captives A painter, a poet, an heiress, and a spy in a World War II British internment camp

"Following the events of Kristallnacht in 1938, Peter Fleischmann evaded the Gestapo's midnight roundups in Berlin by way of a perilous journey to England via the Kindertransport train. But he could not escape the British police, who came for him in the early hours and shipped him off to Hutchinson Camp on the Isle of Man, under suspicion of being a spy for the very regime he had fled. Peter's story was no isolated incident. During Hitler's rise to power in the 1930s, tens of... thousands of German and Austrian Jews escaped and found refuge in Britain. Once war broke out in 1939, the nation turned against them, fearing that Nazis had planted spies posing as refugees. Innocent asylum seekers thus were labeled "enemy aliens" and ultimately sentenced to an indefinite period of internment. When Peter arrived at Hutchinson Camp, he found one of history's most astounding prison populations: renowned professors, composers, journalists, and artists. Together, they created a thriving cultural community, complete with art exhibitions, lectures, musical performances, and poetry readings. The artists welcomed Peter as their pupil and forever changed the course of his life. Meanwhile, suspicions grew that a real spy was hiding among them-one connected to a vivacious heiress from Peter's past. Drawing from unpublished first-person accounts and newly declassified documents from the British government, award-winning journalist Simon Parkin tells the story of this unlikely group of internees. The Island of Extraordinary Captives brings history to life in vivid detail, revealing the hidden truth of Britain's grave wartime mistake and showcasing how hope and creativity can flourish in even the darkest of circumstances"--