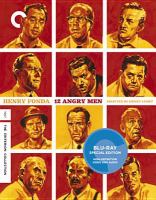 A behind-closed-doors look at the American legal system as riveting as it is spare, the iconic adaptation of Reginald Rose's teleplay stars Henry Fonda as the initially dissenting member of a jury of white men ready to pass judgment on a Puerto Rican teenager charged with murdering his father. What results is a saga of epic proportions that plays out in real time over ninety minutes in one sweltering room. One of the most radical big-screen courtroom dramas in cinema history.