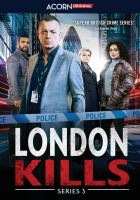 "One of Britain's most thrilling series" (Entertainment Weekly) returns as the elite squad of detectives begin investigating a string of murders with links to the police force. Could the killer be a fellow officer? The case has deeply personal ramifications for the team led by DI David Bradford, involving DS Vivienne Cole's ex-husband and threats to DC Rob Brady's family. As they try to discover if a murderer lurks among their ranks, the detectives also investigate the d...eath of a schoolboy that could be connected to a girl's suicide, a widow who somewhat suspiciously refuses to grieve, and the fatal attack on a locksmith that harks back to the manslaughter of Trainee DC Billie Fitzgerald's father a decade earlier.