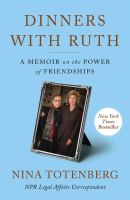 Dinners with Ruth A memoir on the power of friendships

Bookmobile Nonfiction Show me where

*Starred Review* Longtime NPR legal affairs correspondent Nina Totenberg shares the engrossing and engaging story of her friendship with the late Supreme Court Justice Ruth Bader Ginsburg. It's not surprising that these two powerful women became close confidants, despite very different upbringings. Both women came of age in the 1970s, a time when women were attempting to gain access to careers previously dominated by men. Totenberg and Ginsburg both often found themselves to be the only women in the room, and it was inevitable that their paths would cross. The author's smooth storytelling style effectively blends recaps of their developing relationship with landmark judicial decisions and political events. She offers fresh insights into the dealings of Capitol Hill and the Supreme Court, but her personal anecdotes (she and Ginsburg once skipped a conference to go shopping; Ginsburg officiated at Totenberg's wedding), her numerous shout-outs to other women who helped her in her career, and her musings about the nature of friendship are the most compelling parts. Totenberg's story includes triumphs and failures, good times and bad, and a poignant account of Ginsburg's final illnesses and death. Expect considerable publicity and lots of well-deserved demand. Copyright 2022 Booklist Reviews.

In a memoir constructed around the strength of women's friendships to bring about social change, NPR's award-winning legal affairs correspondent Totenberg focuses on her friendship with Ruth Bader Ginsberg. They met when Totenberg was a reporter at the National Observer, seeking information on Ginsberg's legal brief asking the Supreme Court to declare a law that discriminated on the basis of sex to be unconstitutional, and the result was a 50-year friendship. With a 125,000-copy first printing. Copyright 2022 Library Journal.

In this luminous debut, NPR legal correspondent Totenberg delivers a riveting account of her 50-year friendship with Supreme Court justice Ruth Bader Ginsburg. The daughter of Polish violin virtuoso Roman Totenberg, the author was raised in the 1940s and '50s in a bustling home filled with music and culture. After giving Boston University a college try, Totenberg dropped out to become a journalist. Parallel to her story runs an equally enthralling look at Ginsburg's life, from her modest childhood in the 1930s as the daughter of immigrant factory workers to studying law at Harvard. Their lives collided in 1971 when Ginsburg, arguing a sex discrimination case before the Supreme Court, received a phone call from Totenberg, who was covering the story for the National Observer. While their friendship saw plenty of historic highs, including Totenberg's groundbreaking legal work at NPR and Ginsburg's confirmation as a SCOTUS justice in 1993, Totenberg writes, "The irony is that while work... defined each of us... our friendship was never about work." Indeed, it's Totenberg's writing about the personal hardships they overcame together—including the death of Totenberg's first husband, Sen. Floyd Haskell, and Ginsburg's bouts with colon, pancreatic, and lung cancer—that imbues her narrative with emotional depth, making this portrait of friendship all the more captivating. Readers are sure to be charmed. (Sept.) Copyright 2022 Publishers Weekly.

In this moving story of the joy and true meaning of friendship, NPR’s award-winning legal affairs correspondent recounts her nearly 50-year friendship with Supreme Court Justice Ruth Bader Ginsburg, presenting an extraordinary account of how they paved the way for future generations by tearing down professional and legal barriers.

Celebrated NPR correspondent Nina Totenberg delivers an extraordinary memoir of her personal successes, struggles, and life-affirming relationships, including her beautiful friendship of nearly fifty years with Supreme Court Justice Ruth Bader Ginsburg.Four years before Nina Totenberg was hired at NPR, where she cemented her legacy as a prizewinning reporter, and nearly twenty-two years before Ruth Bader Ginsburg was appointed to the Supreme Court, Nina called Ruth. A reporter for The National Observer, Nina was curious about Ruth’s legal brief, asking the Supreme Court to do something revolutionary: declare a law that discriminated “on the basis of sex” to be unconstitutional. In a time when women were fired for becoming pregnant, often could not apply for credit cards or get a mortgage in their own names, Ruth patiently explained her argument. That call launched a remarkable, nearly fifty-year friendship.Dinners with Ruth is an extraordinary account of two women who paved the way for future generations by tearing down professional and legal barriers. It is also an intimate memoir of the power of friendships as women began to pry open career doors and transform the workplace. At the story’s heart is one, special relationship: Ruth and Nina saw each other not only through personal joys, but also illness, loss, and widowhood. During the devastating illness and eventual death of Nina’s first husband, Ruth drew her out of grief; twelve years later, Nina would reciprocate when Ruth’s beloved husband died. They shared not only a love of opera, but also of shopping, as they instinctively understood that clothes were armor for women who wanted to be taken seriously in a workplace dominated by men. During Ruth’s last year, they shared so many small dinners that Saturdays were “reserved for Ruth” in Nina’s house.Dinners with Ruth also weaves together compelling, personal portraits of other fascinating women and men from Nina’s life, including her cherished NPR colleagues Cokie Roberts and Linda Wertheimer; her beloved husbands; her friendships with multiple Supreme Court Justices, including Lewis Powell, William Brennan, and Antonin Scalia, and Nina’s own family—her father, the legendary violinist Roman Totenberg, and her “best friends,” her sisters. Inspiring and revelatory, Dinners with Ruth is a moving story of the joy and true meaning of friendship.