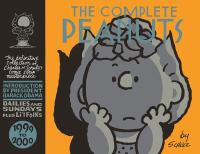 "This penultimate volume of The Complete Peanuts series collects the last year of the most beloved comic strip ever created. Rerun embarks on a career as an 'underground' comic book artist, and Snoopy's siblings Andy, Olaf, and Spike (who cameo in the Peanuts movie) appear. The volume is rounded out with the complete Li'l Folks. Prefiguring Peanuts and its major themes, this weekly single-panel comic Schulz produced for his hometown paper is available here for the first ...time outside the collector's market!"--Back cover.

The publisher of the Complete Peanuts series scored a major publicity coup when it snagged President Obama to pen an introduction for the latest volume, but the book's genuine significance lies in the fact that it marks the conclusion of the landmark project reprinting the entire 50-year run of the much-loved newspaper strip (a "bonus" volume will collect Schulz's Peanuts drawings outside of the strip itself). These last strips are marked by the increased prominence of the strip's newest cast member, Linus' and Lucy's younger brother, Rerun, who learns the ropes of baseball under the tutelage of "The Master," Charlie Brown, and takes up drawing underground comic books. Schulz's line had grown increasingly shaky in his final years, but while the casual assurance of earlier decades may be gone, the slightly wavering mien of the characters imparts a touching humanity to these twilight installments. All two-and-a-half-years of Peanuts' precursor, Schulz's late-1940s weekly gag feature, Li'l Folks, rounds out the volume, bringing Schulz's cartooning career full circle. Copyright 2014 Booklist Reviews.

A 25th volume of The Complete Peanuts collects the very final year of the defining comic strip of the 20th century, and also includes a weekly one-panel comic that Charles Schulz produced for his hometown paper.

Collects all the "Peanuts" comic strips published in newspapers from 1999-2000, including both daily and Sunday strips, as well as the complete run of the author's single-panel comic, Li'l Folks, which came before Peanuts and dealt with many of its themes.