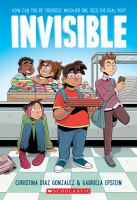 Can five overlooked kids make one big difference? There's George: the brain Sara: the loner Dayara: the tough kid Nico: the rich kid And Miguel: the athlete And they're stuck together when they're forced to complete their school's community service hours. Although they're sure they have nothing in common with one another, some people see them as all the same... just five Spanish-speaking kids. Then they meet someone who truly needs their help, and they must decide ...whether they are each willing to expose their own secrets to help... or if remaining invisible is the only way to survive middle school.

*Starred Review* Gonzalez and Epstein's illuminating and engaging graphic novel begins in the principal's office, where five Latino kids—George, Nico, Miguel, Dayara, and Sara—have been summoned. Over the course of the book, the circumstance that lands them in the office becomes clear: while assigned to community service duty in the cafeteria, which mostly involves being scolded by the lunch lady and picking up the yard outside, the group meets a little girl and her mom who are living in their van. The kids want to help, but doing so involves skirting around the lunch lady's rules—even though they're clearly doing a good thing. Gonzalez and Epstein nicely flesh out each kids' characters with snippets of family lives or challenges at school, and the variety of their experiences offers a glimpse of the rich diversity of Latino experiences. All of the kids speak Spanish, to varying degrees, and the speech balloons not only include dialogue in both Spanish and English but neatly reveal miscommunication and even some linguistic jokes. In her inviting, warm, and expressive artwork, Epstein portrays a refreshing variety of body shapes, skin tones, and hair colors among the characters, which further emphasizes that there's not one way to be Latino. With a sweet twist at the end, multifaceted characters, and moments of genuine comedy, this is pitch-perfect for anyone who loves Raina Telgemeier or Varian Johnson. Grades 3-7. Copyright 2022 Booklist Reviews.

Middle schooler Jorge "George" Rivera, an American student of Puerto Rican descent, just wants to keep his head down until he can get into a high school magnet program. When he's called into the principal's office about the school's community service initiative, he's worried that the administration knows he's recently moved outside the school district with his single mother, who's experiencing financial precarity. But the principal, portrayed as Black and obsessed with winning an annual award for the initiative, tells George that he can carry out his service hours in the cafeteria, alongside "students like you." Though he doesn't speak much Spanish, George finds himself assigned as translator for a disparate group of kids—tough-seeming Dayara, who is Cuban; Dominican jock Miguel; rich kid Nico, who's Venezuelan; and loner Sara, who's Mexican. When the group meets an unhoused family, though, they come together to provide assistance in their own way. Alternating flashbacks among the five students, Gonzalez (Concealed) clearly shows how each kid—all characterized distinctly and with complexity—is more than others' assumptions. Epstein's expressive contemporary style brings the characters' singular experiences to the forefront in a story that largely focuses on its child protagonists finding community over change among its biased adults. Creators' notes conclude. Ages 8–12. Author's agent: Jennifer Rofé, Andrea Brown Literary. Illustrator's agent: Chelsea Eberly, Greenhouse Literary.(Aug.) Copyright 2022 Publishers Weekly.

Gr 4–7—When George, who is Puerto Rican, is assigned community service hours working in his middle school cafeteria with "other students like you," he expects to be with the gifted kids, but instead, he finds out that the only thing he has in common with the volunteer group is that they are all Latinx students being unfairly stereotyped by their educators. There's Miguel, the jock who secretly loves drawing, who is Dominican; Dayara, a Cuban girl who constantly gets in trouble and struggles in school; Sara, a loner, who is Mexican; and Nico, a Venezuelan boy with a reputation as a stuck-up rich kid. By the end of the week, they are all called into the principal's office to explain how the five of them "conspired to do something." As each student tells their portion of the story, readers are shown the complexity and individuality of each of their lives, shattering the stereotypes that the adults and other students in the story place on them. However, what makes this modern Breakfast Club story truly unique is the use of Spanish and English text to expose readers to the complexities of multi-language literacy. Each character has their own level of ability with English and Spanish, making their individual voices and communication methods unique, but ample translations of both languages make for an enjoyable reading experience. VERDICT A welcome addition to any graphic novel collection, Invisible skillfully explores the negative impact of stereotyping while also offering an entertaining and spirited reading experience.—Amanda Melilli Copyright 2022 School Library Journal.

When five overlooked students are forced to complete their school’s community service hours, they meet someone in need but must decide if they are each willing to expose their own secrets to help... or if remaining invisible is the only way to survive middle school. Simultaneous and eBook. Illustrations.

For fans of Twins and Allergic, a must-have graphic novel about five very different students who are forced together by their school to complete community service... and may just have more in common than they thought.Can five overlooked kids make one big difference?There’s George: the brainSara: the lonerDayara: the tough kidNico: the rich kidAnd Miguel: the athleteAnd they’re stuck together when they’re forced to complete their school’s community service hours. Although they’re sure they have nothing in common with one another, some people see them as all the same . . . just five Spanish-speaking kids.Then they meet someone who truly needs their help, and they must decide whether they are each willing to expose their own secrets to help . . . or if remaining invisible is the only way to survive middle school.With text in English and Spanish, Invisible features a groundbreaking format paired with an engaging, accessible, and relatable storyline. This Breakfast Club–inspired story by Christina Diaz Gonzalez, award-winning author of Concealed, and Gabriela Epstein, illustrator of two Baby-Sitters Club graphic novel adaptations, is a must-have graphic novel about unexpected friendships and being seen for who you really are.