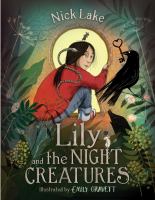 Lily and the night creatures

Lily is chronically ill, but while her parents are welcoming a new baby she sneaks home from her grandmother's house and, aided by animal friends, combats the demons who have moved in.

*Starred Review* In the tradition of Neil Gaiman's Coraline (2002), Lake offers up a creepy tale of a sickly girl who must face dark forces to save her family. Lily is dealing with a lot: frequent visits to the hospital for dialysis, the loss of her normal life, and the imminent and very unwelcome (to Lily) arrival of a new sibling. When it's time for the baby to be born and Lily is left with her grandmother, the girl becomes determined not to be cast aside so easily. Sneaking out of her grandmother's house, Lily bikes home to find her mother holding a baby—only it's not her mother. Her eyes are dark as coal, and she doesn't recognize Lily. And then she locks Lily out. The girl's shock and confusion are compounded when she retreats to the yard and encounters a group of talking animals: a mole, a crow, a mouse, and a snake. These creatures act as a delightful foil to the malicious "replacements" in the house, and they assist Lily in her new mission—evicting the impostors before her real family returns. Lake, assisted by Gravett's atmospheric illustrations, creates a truly menacing foe for Lily to defeat, but the process results in the girl's emotional growth and a much-needed shift in perspective. Rich with magic and a fair number of shivers, this is an empowering tale for the brave of heart. Grades 3-5. Copyright 2022 Booklist Reviews.

Viscerally rendered emotions and resonant chronic-illness representation build to a thrilling collaboration that deals in horror tropes. Since her diagnosis, whose treatment reads as dialysis, Lily Wilson's parents are "always telling her not to do stuff. To rest. To preserve her strength," and Lily fears her soon-arriving sibling, The Baby, will replace her. Left with her grandmother when her mother goes into labor, Lily sneaks home "to remind her parents that they already had her," but finds her house dark, "like someone had put out its eyes." It's occupied by her parents' doppelgängers—coal-eyed and quick-moving—which plan to absorb her family's life forces and offer to do the same for her. Though tempted ("No more hospital visits, no more tests, no more injections") and doubtful of her strength, Lily, supported by four magical garden animals, works to expel the replacements, save her family, and reclaim her life. A Coraline-like plot yields the novel's main substance: Lily's rediscovery of her own self-worth following diagnosis and family changes. Employing concrete metaphors, Lake (Satellite) confronts taboo but important emotions, including jealousy and passive suicidal ideation, softening them with the animals' optimistic banter. Grayscale illustrations by Gravett (The Imaginary) unsettle through off-kilter architecture and whimsical figures as, alongside Lily, illustrations and text evolve toward hope. All characters cue as white. Ages 8–12. (Aug.) Copyright 2022 Publishers Weekly Annex.

When Lily’s home is overtaken by two creatures that look like her parents, she must beat these shadowy replacements to be reunited with her real parents. 20,000 first printing. Simultaneous eBook. Illustrations.

Lily is chronically ill, but while her parents are welcoming a new baby she sneaks home from her grandmother's house and, aided by animal friends, combats the demons who have moved in.

A young girl sets out to defeat the evil spirits inhabiting her home in this delightfully dark middle grade adventure perfect for fans of Coraline and Margaret Peterson Haddix’s The Strangers.Lily is used to hospitals—she’s spent more time in them than out of them thanks to her recent health issues. But when her mother goes into labor, her parents drop her off at her grandmother’s house and rush to the hospital without her. Lily doesn’t want the new baby to replace her and she certainly doesn’t want to be sick anymore.Most frustrating of all, she forgot to pack Willo, her favorite toy. Under her grandma’s not-so-watchful supervision, Lily sneaks back home to get Willo. Expecting to find an empty house, she is surprised to find her parents there. But something isn’t right... They look just like her mom and dad until she gets closer and sees their coal black eyes. And they refuse to let her in—it’s their house now.With the help of some surprising new friends that she meets in her garden, Lily is determined to beat these shadowy replacements and be reunited with her real parents. But is she strong enough to triumph?