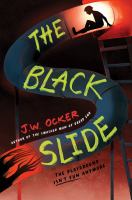 Against his better judgment, fifth grader Griffin Birch follows his best friend down the new slide in the school playground, and at the other end of this portal they discover a cruel world populated by bloodthirsty creatures on a quest to become immortal.

This horror phantasmagoria follows 11-year-old Griffin as a trip down the school's eerie slide results in him and his friends being transported from the playground to the painground, a nightmarish world where monsters are out to get them. Ocker's foray into middle-grade horror brings fresh material to the category, including tropes and themes typically relegated to YA or adult books. Readers should be aware of the content warnings (animal harm, child abuse) before proceeding, as well as the fact that a thinly veiled metaphor for abuse pops up throughout the book. Otherwise, this is a knuckle-tightening trip into a haunting environment from which Griffin and his friends must escape before it's too late. Readers will appreciate the moments of friendship in the face of death and danger, which bring some much-needed levity and warmth to a dark, dreary story line. While this book may not be a fit for every horror fan, it weaves an interesting premise and promises poignant moments between the characters as they try to escape the hellscape they've found themselves in. Grades 6-8. Copyright 2022 Booklist Reviews.

The sudden appearance of a mysterious black tube slide brings unease to the Osshua Elementary School playground, capitalizing on the fear of impending adolescence, in this genuinely bloodcurdling thriller by Ocker (The Smashed Man of Dread). When bully Ozzie Aldridge dares fifth grader Griffin Birch to be the first down the eerie Black Slide in exchange for a year's reprieve from Ozzie's torment, Griffin readily agrees, but upon entering the tube, feels like "something grabbed him by the ankles and yanked." After falling for an indefinite duration ("The Black Slide was not this long. Not this long by a lot. And yet he kept sliding"), he experiences a "lifetime inside that darkness," and finally emerges with an inexplicably broken arm. But that's the least of Griffin's concerns as his classmates begin disappearing at an increasingly alarming rate, including his best friend. While a seemingly singular focus on the sinister elements over character makes it occasionally difficult to connect with the cast, Ocker's contemplative, metaphor-laden narration ("Griffin felt the inevitable next moment like a choking haze in the room") lends pensiveness and gravitas to this dread-inducing novel. Ages 8–12. Agent: Alex Slater, Sanford J. Greenburger Assoc. (Aug.) Copyright 2022 Publishers Weekly Annex.

Gr 5 Up—A creepy horror novel that fans of Stranger Things will gravitate toward. When a large black slide suddenly appears on the playground just outside his fifth grade classroom window, Griffin Birch cannot stop staring out at it. Griffin wants nothing to do with the terrifying slide as his classmates start disappearing down it and no one seems to notice. Despite his fear, he follows his friend Laila down through the tube, and, instead off emerging on the playground, they land in a plane called the Painful Place. There, children are experimented on by white, chalky, metal-studded creatures. One of the scariest aspects is how the children in the Painful Place seem to succumb and accept the torture as inescapable. While the pacing occasionally drags, the author builds a vivid universe. Griffin and Laila's friendship is well developed, although there are flat secondary characters. This title may need a trigger warning for some, as Griffin goes through an experience that abruptly makes him relive being physically and psychologically abused by a parent. VERDICT A good choice for libraries where readers are moving on from "Goosebumps" and are in search of something to bridge the gap to YA horror.—Claire Covington Copyright 2022 School Library Journal.

Using the new black slide on the playground, Griffin Birch and his best friend, Laila, end up in a cruel world of bloodthirsty creatures hungering for immortality where the friends must fight for their survival and the fate of the world. 30,000 first printing. Simultaneous eBook.

Against his better judgment, fifth grader Griffin Birch follows his best friend down the new slide in the school playground, and at the other end of this portal they discover a cruel world populated by bloodthirsty creatures on a quest to become immortal.

An ominous new slide on the playground leads to a world of fear in The Smashed Man of Dread End author J.W. Ocker’s latest middle grade horror, perfect for fans of R.L. Stine and Scary Stories to Tell in the Dark.Griffin Birch isn’t known for being brave, but there’s something about the new black slide on the elementary school playground that’s made him curious. Against his better judgement, he just has to follow his best friend Laila down. But the Black Slide is no ordinary piece of playground equipment. What Griffin and Laila find at the other end of this strange portal is a cruel world, populated by bloodthirsty creatures on a quest to become immortal.And it’s up to Griffin to save himself, his best friend—and the future of earth itself. Fans of classic horror will devour this creepy adventure packed with more twists and turns than the ominous black slide itself.