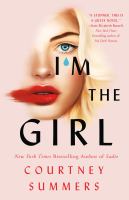 I'm the girl A novel

When sixteen-year-old Georgia Avis finds the dead body of thirteen-year-old Ashley James outside the gates of an exclusive resort, she teams up with Ashley's older sister Nora to find the killer. She is thrown into a world of unimaginable wealth and privilege-- and the fight for her life. As Ashley's killer closes in, it may not be a matter of who is guilty, but who is guiltiest. -- adapted from jacket

Sixteen-year-old Georgia Avis knows her exquisite beauty will take her places. The one place she wants to go is Aspera, a gated resort in her town that caters to the wealthy and powerful who want absolute privacy. Despite the warnings from her late mother, Georgia makes her way to the resort, determined to become an Aspera Girl. Along the road, she discovers the raped and mangled body of 13-year-old Ashley James, the sister of classmate Nora. Even as Georgia lands a job at Aspera and attracts the attention of its owners, she teams up with Nora to unearth what really happened to Ashley, a sweet romance blossoming between Georgia and Nora in the process. The unexpected truth is discovered only as they delve into a twisting labyrinth of deceit and cover-ups. Summers examines the privileged decadence, predatory activities, and subtle grooming that tempt young things into believing they are precious and special. Brutal and bold in its telling, Summers' account of Georgia's inability to grasp that her dreams are on a course to becoming nightmares yields a raw and crushing page-turner. HIGH-DEMAND BACKSTORY: Best-seller Summers' Epstein-tinged thriller will be on the radar of her sizable fan base. Ready the waiting lists! Grades 9-12. Copyright 2022 Booklist Reviews.

Summers (Project X) attentively outlines harsh realities of bodily autonomy, predatory behavior, and sexual violence in this emotionally raw and brutally captivating novel. Georgia Avis, 16, wants to be an Aspera girl, one of the beautiful young women who works at a members-only mountainside resort. While biking to Aspera, hoping to persuade them to hire her, she's knocked unconscious in a hit-and-run and, when she comes to, finds her bike and bag missing. Injured, she stumbles upon the corpse of 13-year-old Ashley James, who was sexually assaulted before her death. When George makes it to Aspera, the owners take her under their wing, giving her an admin job; while she's disappointed to not be an Aspera girl, it's implied that if she does well, she can move up. At Aspera, she befriends Ashley's older sister, Nora, and helps her dig into the mystery of Ashley's assault and death even as George delves deeper into the sinister adult world of glitz and glamour she's longed for. Summers expertly weaves together drama, mystery, and romance via George's guileless narration for an intense look into one girl's wish to be seen as mature, and the powers that manipulate her, in this powerful, ultimately hopeful performance. Characters read as white. Ages 13–up. Agent: Faye Bender, Book Group. (Sept.) Copyright 2022 Publishers Weekly.

Gr 10 Up—In Ketchum, the shadowy organization Aspera rules everything—including the local economy and law enforcement—from behind its gated entrance in the mountains. Despite a lifetime of warnings from her now-deceased mother, 16-year-old Georgia is determined to convince her brother and guardian, Tyler, to let her work there; not even finding 13-year-old Ashley James's body on the side of the road can change her mind. When magnetic, beautiful Nora, Ashley's older sister, demands Georgia's help to find out if Ashley's death is connected to Aspera, Georgia sees a way to solve everyone's problems and impress her crush at the same time. But the further Georgia is pulled into the orbit of Matthew and Cleo Hayes, owners and monarchs of Aspera, the more she begins to understand why her mother was so adamant she stay away, and the less sure she is that she will ever get to leave. From the opening scene, Summers propels readers into an unwavering staring contest with some of the darkest truths the world has to offer young women. Georgia seeks approval and acceptance at every turn, while grappling with her growing understanding of the dangers she faces and trying to determine where her trust and loyalty should lie. Unexpected revelations and a quick pace keep the more disturbing sequences from being overwhelming, and the tenderness with which Summers handles even her angriest and most revenge-obsessed characters is on full display here, providing brief moments of respite from the rage and brutality. VERDICT A powerful and important story recommended for all library collections, though with a caution for some sensitive readers.—Allie Stevens Copyright 2022 School Library Journal.

After discovering the dead body of a 13-year-old girl, 16-year-old Georgia Avis decides to find and bring the killer to justice before he strikes again, drawing her into a world of money, power and beauty without conscience or consequence. Simultaneous eBook.

When sixteen-year-old Georgia Avis finds the dead body of thirteen-year-old Ashley James outside the gates of an exclusive resort, she teams up with Ashley's older sister Nora to find the killer, and she is thrown into a world of unimaginable wealth and privilege--and the fight for her life.

The next searing and groundbreaking queer young adult novel from New York Times bestselling and Edgar Award-winning author Courtney Summers, already hailed as..."A stirring, thought-provoking thriller.”—Ashley Audrain, New York Times bestselling author of The Push"A stunner."—Kate Elizabeth Russell, New York Times bestselling author of My Dark Vanessa"Powerful."—Angeline Boulley, #1 New York Times bestselling and Printz Award-winning author of Firekeeper’s DaughterAll sixteen-year-old Georgia Avis wants is everything, but the poverty and hardship that defines her life has kept her from the beautiful and special things she knows she deserves. When she stumbles upon the dead body of thirteen-year-old Ashley James, Georgia teams up with Ashley's older sister Nora, to find the killer before he strikes again, and their investigation throws Georgia into a glittering world of unimaginable privilege and wealth--and all she's ever dreamed. But behind every dream lurks a nightmare, and Georgia must reconcile her heart's desires with what it really takes to survive. As Ashley's killer closes in and their feelings for one another grow, Georgia and Nora will discover when money, power, and beauty rule, it's not always a matter of who is guilty but who is guiltiest--and the only thing that might save them is each other.A spiritual successor to the breakout hit Sadie, I’m the Girl is a brutal and illuminating account of how one young woman feels in her body as she struggles to navigate a deadly and predatory power structure while asking readers one question: if this is the way the world is, do you accept it?