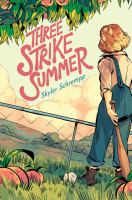 "Dust Bowl refugee Gloria Mae Willard finds herself uprooted and working on a California peach orchard, where she tries to join the secret, all-boys baseball team that she's desperate to play on"--

*Starred Review* Dropping readers into the Dust Bowl, Schrempp's historical novel accurately captures the trials and tribulations of families displaced during this period. The Willard family has been dealt an unfortunate hand—drought, no crops to sell, and dusty conditions that result in the death of their baby son. Like droves of others, they're forced out of their home and head west, taking only what fits in their truck. Gloria Mae Willard's parents find jobs as pickers in the California orchards, settling at the Santa Ana Holdsten Peach Orchard for both work and housing. Strict rules at the company compound and exploitative practices create a tense atmosphere and give rise to organizers and ugly reprisals. For her own part, spunky Gloria is itchin' to pitch fastballs. When she learns that there's a secret ball team at the compound, she refuses to be put off by its all-boys attitude and channels the organizing spirit of the workers, with wide-ranging results for everyone. Schrempp's writing is thoughtful and accessible, containing richly developed characters—Gloria is outspoken and determined yet teachable; her family, resilient. Even her nemesis is well-rounded. Readers will applaud Gloria and the workers while gaining understanding of a time that extends far beyond sepia-toned stills. This moving tale breathes life, depth, and color into the era. Grades 4-7. Copyright 2022 Booklist Reviews.

Debut author Schrempp's uplifting Dust Bowl–era novel centers around determined Gloria Mae Willard who, along with her parents and older sister Jessamyn, head to find work in California after the bank takes their Oklahoma farm. Gloria, still grieving the death of her baby brother, resents her parents for allowing the family to leave home behind and, later, to live in a rundown shack on a "factory farm" where they harvest peaches in oppressive heat for long hours and low pay. She also resents never being allowed to play baseball, despite having an arm so good that she once "cracked five birds outta the sky." After learning about a makeshift team of boys from the orchard, Gloria risks breaking the farm's strict rules, against organizing in groups and leaving the fenced-in areas, to prove she can play ball. Gloria's forthright narration showcases her tenacity and burning sense of injustice, which transforms her parents' resignation into resolve, providing an admirable maturation arc alongside a vividly rendered, emotionally vulnerable account of the harsh conditions faced by migrant workers. An author's note provides historical context. Characters present as white. Ages 8–12. Agent: Ginger Knowlton, Curtis Brown. (Aug.) Copyright 2022 Publishers Weekly.

"Dust Bowl refugee Gloria Mae Willard finds herself uprooted and working on a California peach orchard, where she tries to join the secret, all-boys baseball team that she's desperate to play on"--

“Told in a voice that is so real it reeks of filched peaches, this book is a home run.” —Amy Sarig King, Printz Award–winning author of Dig and The Year We Fell from SpaceSandlot meets Esperanza Rising in this lyrical middle grade novel set in the 1930s about a strong-willed girl who finds her voice in a tale of moxie, peaches, and determination to thrive despite the odds.When the skies dried up, Gloria thought it was temporary. When the dust storms rolled in, she thought they would pass. But now the bank man’s come to take the family farm, and Pa’s decided to up and move to California in search of work. They’ll pick fruit, he says, until they can save up enough money to buy land of their own again.There are only three rules at the Santa Ana Holdsten Peach Orchard: No stealing product. No drunkenness or gambling. And absolutely no organizing.Well, Gloria Mae Willard isn’t about to organize any peaches, no ma’am. She’s got more on her mind than that. Like the secret, all-boys baseball team she’s desperate to play for, if only they’d give her a chance. Or the way that wages keep going down. The way their company lodgings are dirty and smelly, and everyone seems intent on leaving her out of everything.But Gloria has never been the type to wait around for permission. If the boys won’t let her play, she’ll find a way to make them. If the people around her are keeping secrets, then she’ll keep a few of her own. And if the boss men at the Santa Ana Holdsten Peach Orchard say she can’t organize peaches, then by golly she’ll organize a whole ball game.