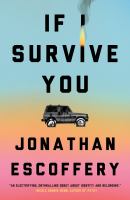 If I survive you

*Starred Review* First-time author Escoffery's collection of interconnected stories confirms his already prize-winning status. Jamaican Americans living in Miami, Trelawny and his family are routinely asked, What are you? His parents speak English that no one understands, their light skin must signify some Puerto Rican or Cuban heritage, his mother says they are mostly European, and his father says they aren't Black, they are Jamaican. Things become further complicated when Trelawny's father moves out, taking Trelawny's older brother, Delano, with him, and Trelawny's already fragile place in the world cracks. He barely gets by, while still trying to impress a father who forever chooses Delano. The stories move chronologically, by years: Delano starting a landscaping business that ultimately fails due to tragedy; Trelawny attending a mostly white college in the Midwest, then living out of his car while working at a retirement community; their cousin trawling lobsters and learning family secrets. The writing and characters are nuanced, with much pain and trauma but also moments of levity and humor. Trelawny is a wonder, constantly trying to improve himself and yet battered again and again by his own actions, or, more likely, those outside his control, like the ever-present Miami hurricanes. Copyright 2022 Booklist Reviews.

This debut from Plimpton Prize winner Escoffery links together sharply conceived scenarios to tell the story of a Jamaican family striving to make it in Miami. As they survive hurricane, recession, marital breakup, lousy houses, subpar jobs, and discrimination, they wrestle with issues of self and identity; here they are Black, while back home folks say they're no longer Jamaican. At the narrative heart is younger son Trelawny, figuring out how to survive. A buzzing debut and at first glance refreshingly original and caustically beautiful; with a 100,000-copy first printing. Copyright 2022 Library Journal.

DEBUT This compelling set of interrelated short stories all center on the experiences of a family that moved to Miami from Jamaica during the turbulent 1970s, with Escoffery (winner of the Paris Review's 2020 Plimpton Prize for Fiction) offering unique insight into issues of race and belonging. The main narrator is Trelawny, whose questions about his Jamaican, U.S., and racial identities fuels the bulk of the work. In "Under the Ackee Tree," written from the perspective of Trelawny's domineering father, readers start to understand what made the father the flawed character that he is. Another story, told by older brother Delano, helps shed light on the complicated relationship between the two siblings. This relationship is further explored in the story "If I Survive You," which illustrates the struggle between the brothers over the family home. The most dire story, "Splashdown," features Trelawny's cousin Cukie, who's working to get his life together but becomes a victim of abjectly cruel circumstances. It's heartbreaking. VERDICT A revelatory work, full of a young man's questioning and told in a distinctive voice, this contemplation of identity, culture, and race in the United States today is highly recommended.—Henry Bankhead Copyright 2022 Library Journal.

Escoffery's vibrant and varied debut, a linked collection, chronicles the turbulent fate of a Jamaican American family in Miami. Trelawny, the main character in most of the entries, is the younger of two sons. He questions where his light skin places him within America's racial categories and where he fits into family hierarchy: "You want to prove your father bet on the wrong son," Trelawny narrates in the title story, addressing his father's favorable treatment of his older brother, Delano, an arborist and musician. "In Flux" recounts Trelawny's liberal arts education as he leaves Miami and attends college in the colder, and more racially homogenous, Midwest. "Odd Jobs," "Independent Living," and the title story center on the strange and ethically dubious gigs Trelawny takes to survive, including a running stint as a voyeur for a rich Miami couple, asking himself all the while: "What kind of employee are you? And just what kind of man?" Two stories exert a thrilling dramatic pull: In "Splashdown," Trelawny's cousin Cukie learns the lobster trapping trade, and something darker, from his estranged father; and "If He Suspected He'd Get Someone Killed..." follows Delano rushing to secure a bucket truck and a tree-trimming contract before a dangerous storm arrives. This charged work keeps a tight hold on the reader. (Sept.)Correction: Due to an editing error, this review originally published without its star. Copyright 2022 Publishers Weekly.

Fleeing to Miami after political violence consumes their native Kingston, a younger son of a Jamaican family, Trelawny, struggles to carve out a place for himself amid financial disaster, racism and flat-out bad luck, clawing himself out of homelessness with a series of odd, often hilarious jobs. 100,000 first printing.

LONGLISTED FOR THE 2022 NATIONAL BOOK AWARD FOR FICTION. NATIONAL BESTSELLER. "If I Survive You is a collection of connected short stories that reads like a novel, that reads like real life, that reads like fiction written at the highest level." —Ann Patchett • "Kaleidoscopic, urgent, hilarious, revelatory and like nothing you've read before." —Marlon James • "A ravishing debut." —The New YorkerBelletrist's September pick. A New York Times Book Review Editors' Choice, a September 2022 IndieNext Pick, and named a Best Book of September by Amazon and Apple Books. A major debut, blazing with style and heart, that follows a Jamaican family striving for more in Miami, and introduces a generational storyteller. In the 1970s, Topper and Sanya flee to Miami as political violence consumes their native Kingston. But America, as the couple and their two children learn, is far from the promised land. Excluded from society as Black immigrants, the family pushes on through Hurricane Andrew and later the 2008 recession, living in a house so cursed that the pet fish launches itself out of its own tank rather than stay. But even as things fall apart, the family remains motivated, often to its own detriment, by what their younger son, Trelawny, calls “the exquisite, racking compulsion to survive.”Masterfully constructed with heart and humor, the linked stories in Jonathan Escoffery’s If I Survive You center on Trelawny as he struggles to carve out a place for himself amid financial disaster, racism, and flat-out bad luck. After a fight with Topper—himself reckoning with his failures as a parent and his longing for Jamaica—Trelawny claws his way out of homelessness through a series of odd, often hilarious jobs. Meanwhile, his brother, Delano, attempts a disastrous cash grab to get his kids back, and his cousin, Cukie, looks for a father who doesn’t want to be found. As each character searches for a foothold, they never forget the profound danger of climbing without a safety net.Pulsing with vibrant lyricism and inimitable style, sly commentary and contagious laughter, Escoffery’s debut unravels what it means to be in between homes and cultures in a world at the mercy of capitalism and whiteness. With If I Survive You, Escoffery announces himself as a prodigious storyteller in a class of his own, a chronicler of American life at its most gruesome and hopeful.