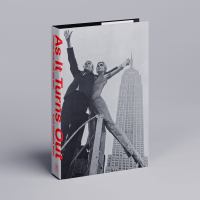 As it turns out Thinking about Edie and Andy

"The story of model, actress, and American icon Edie Sedgwick, told by her sister with unfailing empathy, sharp insight, and firsthand observations of her whirlwind life"--

Due to her father's mental-health difficulties, Wohl's parents were advised not to have children. They had eight, including Wohl's much younger sister, Edie Sedgwick. Famous for her beauty, mod style, extravagance, and daring cinematic collaborations with Andy Warhol in the mid-1960s, Edie was the epitome of hip big-city glamour. Yet their branch of the blueblood Sedgwick clan lived on a big ranch in central California, where everyone rode horses, worked cattle, and navigated her father's harsh demands. Edie was spoiled and traumatized, developing bulimia, enduring hospitalizations, becoming dependent on pills, and tragically dying of an overdose at age 28 in 1971. Wohl also mourns for two brothers, one who died by suicide, the other in a motorcycle accident. in this sensitive, deeply considered chronicle, Wohl offers a fresh and incisive look at Edie's headline-grabbing adventures with Warhol, her superstar power, and their symbiotic relationship while also musing on Warhol's prescient anticipation of our obsession with images. As for her sister, Wohl avers, "What Edie wanted, always, was to experience life with the greatest intensity, and she had no regard for danger." Copyright 2022 Booklist Reviews.

With Animal Joy, poet/psychoanalyst Alsadir, a National Book Critics Circle finalist for the collection Fourth Person Singular, gets serious about studying the importance of laughter (30,000-copy first printing). Long-listed for the National Book Award and a Granta Best of Young American Novelists, Ball was inspired by French writer/artist Édouard Levé's memoir (written at age 39) to offer his own frank Autoportrait in his 39th year. In 1920s Paris, Kiki de Montparnasse was a model, muse, and friend to cultural greats and an artist, cabaret star, and driving force in her own right, as Braude (The Invisible Emperor) highlights in Kiki Man Ray. With Eliot After "The Waste Land," award-winning scholar/poet Crawford follows up his highly regarded Young Eliot (10,000-copy first printing). Standing as both memoir and memorial, Black Folk Could Fly is a first selection of personal nonfiction from the late author/mentor Kenan, whose award-winning works powerfully communicate his experience of being Black, gay, and Southern. Lowell's Memoirs collects the complete autobiographical prose of the great poet, including unpublished early work (10,000-copy first printing). What is home but A Place in the World, and Tuscany celebrant Mayes's new book explores what home really means in all its variations. As Morris explains in her first book of nonfiction, she came to the writing career launched with the multi-million-copy best-selling The Tattooist of Auschwitz by Listening Well (50,000-copy first printing). Composer of the Tony-nominated musical Once Upon a Mattress, author of the novel Freaky Friday and the follow-up screenplay, and chair of the Juilliard School, Rodgers has a lot more to discuss in Shy than being the daughter of Richard Rodgers (25,000-copy first printing). Addressed to Wohl's brother Bobby, who died in 1965, As It Turns Out reconstructs the life of their sister, the iconic actress/model Edie Sedgwick made famous by Andy Warhol (30,000-copy first printing). Copyright 2022 Library Journal.

A biography/memoir of actress and model Edie Sedgwick (1943–71), one of the superstars of Andy Warhol's art films. Wohl (one of Sedgwick's sisters) speculates on the way a young Edie was impacted by their upbringing, by an abrasive father on the family's isolated Southern California ranch. But the book's first section is only peripherally about Edie; there's more focus on the large, wealthy, and dysfunctional family she was born into. This book also shows how Sedgwick's and Warhol's lives intersected for an intense period of time. In fact, Wohl's hyper-focus on Edie's time in New York with Warhol seems a little tedious but does offer a perspective on how groundbreaking Warhol was and how Sedgwick was involved in his art making. Wohl concludes with thoughts from others about how influential and evocative Edie was. VERDICT This is a good recommendation for those who like to read about family dynasties, the mid-century modern New York art world, or people who have a lasting fifteen minutes of fame.—Amanda Ray Copyright 2022 Library Journal.

Wohl—translator and older sister of downtown New York City art world habitué Edie Sedgwick—debuts with a perceptive account of her sibling's life. Born in 1931, Wohl grew up on isolated Santa Barbara–area ranches as the oldest of eight children, all brought up by extremely controlling parents. In response to Edie's shock at catching their father having an affair in 1957, he "called the doctor and said she was crazy; the doctor came and put her to bed and shot her full of tranquilizers." Edie was in tumult, argues Wohl, long before she met Andy Warhol or entered the wild world of the mid-1960s that ended in her 1971 death by a drug overdose. Wohl barely saw Edie during her Warhol years, and in an attempt to piece together "what she had that I so totally failed to see, but that he saw and put to such effective use," traces her meteoric rise and positions her as a precursor to today's social media influencers, though only at Warhol's doing, as it wasn't "in Edie's nature." Striking photos help tell the story, and Wohl's exhaustive examination of her sister's vulnerability and star appeal give this a unique position among the many books on the Warhol scene. The result is a thoughtful exploration of a tumultuous life. (Aug.) Copyright 2022 Publishers Weekly.

"The story of model, actress, and American icon Edie Sedgwick, told by her sister with unfailing empathy, sharp insight, and firsthand observations of her whirlwind life"--

The sister of Edie Sedgwick tells the story of the icon’s childhood on a California ranch, her lifelong troubles with her parents and eventual relationship with Andy Warhol that led to worldwide fame. 30,000 first printing. Illustrations.

The story of the model, actress, and American icon Edie Sedgwick is told by her sister with empathy, insight, and firsthand observations of her meteoric life.As It Turns Out is a family story. Alice Sedgwick Wohl is writing to her brother Bobby, who died in a motorcycle accident in 1965, just before their sister Edie Sedgwick met Andy Warhol. After unexpectedly coming across Edie’s image in a clip from Warhol’s extraordinary film Outer and Inner Space, Wohl was moved to put her inner dialogue with Bobby on the page in an attempt to reconstruct Edie’s life and figure out what made Edie and Andy such iconic figures in American culture. What was it about Andy that enabled him to anticipate so much of contemporary culture? Why did Edie draw attention wherever she went? Who exactly was she, who fascinated Warhol and captured the imagination of a generation? Wohl tells the story as only a sister could, from their childhood on a California ranch and the beginnings of Edie’s lifelong troubles in the world of their parents to her life and relationship with Warhol within the silver walls of the Factory, in the fashionable arenas of New York, and as projected in the various critically acclaimed films he made with her. As Wohl seeks to understand the conjunction of Edie and Andy, she writes with a keen critical eye and careful reflection about their enduring impact. As It Turns Out is a meditation addressed to her brother about their sister, about the girl behind the magnetic image, and about the culture she and Warhol introduced.