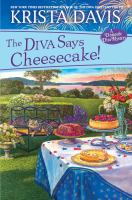 "Old Town's midsummer festivities are getting a tasty addition this year. To coincide with a public performance of Shakespeare's "A Midsummer Night's Dream," Bobbie Sue Bodoin, the Queen of Cheesecake, has hired Sophie to organize a dinner with a dessert buffet on the waterfront. Bobbie Sue's homegrown company is thriving, and since her baking dish overfloweth, she wants to reward her employees. Bobbie Sue has only one menu demand: no cheesecake! But her specia...lty isn't the only thing missing from the evening-Tate, Bobbie Sue's husband, is too, much to her annoyance. Next morning, however, Tate's dead body is discovered. Bobbie Sue insists she didn't kick her spouse to the curb, and begs for Sophie's help finding the real killer. Digging in, Sophie discovers an assortment of Old Town locals who all had reason to want a piece of Tate. Can she gather together the crumbs the killer left behind in time to prevent a second helping of murder?"--