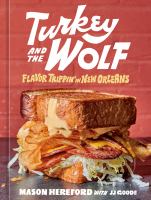 Turkey and the Wolf Flavor trippin' in New Orleans

"An irreverent, fun, and flavorful book of 95 Southern-influenced recipes that put a playful spin on classic country store fare, from the James Beard Award-nominated owner of Turkey and the Wolf in New Orleans"--

Southern food gets a kick in the pants in this exuberant and irreverent debut, a collection of high/low recipes from Hereford, whose buzzy New Orleans restaurant gives the book its title. Sandwiches and other things eaten with hands are the stars of the show, and gluttony-sating ones at that: bread is frequently coated with "soft-ass" butter on both sides and then toasted, and mayonnaise—specifically, Duke's brand, a tattoo of which adorns the author's body—is wantonly slathered on everything from an Italian-style hero (along with 12 ounces of soppressata and a pound and a half of mortadella to feed six) to a spicy chicken sandwich, and is the foundation of a number of sauces. Hereford's no-BS throughout, with advice to buy hash-brown patties from a fast-food joint for his McCaviar bites (topped with anchovy crème fraîche and fish roe) and to load up on store-bought ingredients, be they pork rinds, tostadas, or chicken-flavor soup base. Adventurous home cooks should give the hogshead cheese recipe a go (it's a two-day affair, and pro tip: put the head into the stockpot snout-side up), and the less adventure-inclined can take a run at the "Shrettuce" recipe for thinly shredded lettuce. The recipes are blazing and the tone delightfully profane, making this perfect for anyone ready to check their pretensions and get a little messy. (June) Copyright 2022 Publishers Weekly.

"An irreverent, fun, and flavorful book of 95 Southern-influenced recipes that put a playful spin on classic country store fare, from the James Beard Award-nominated owner of Turkey and the Wolf in New Orleans"--

Drawing inspiration from his childhood, the James Beard Award-nominated owner of Turkey and the Wolf in New Orleans puts a bold, fresh twist on some of the most beloved Southern dishes. Illustrations.

NEW YORK TIMES BESTSELLER • A fun, flavorful cookbook with more than 95 recipes and Power-Ups featuring chef Mason Hereford’s irreverent take on Southern food, from his awarding-winning New Orleans restaurant Turkey and the Wolf   “Mason and his team are everything the culinary world needs right now. This book is a testimony of living life to the most and being your true self!”—Matty MathesonONE OF THE MOST ANTICIPATED COOKBOOKS OF 2022—Delish, Food52Mason Hereford grew up in rural Virginia, where his formative meals came at modest country stores and his family’s holiday table. After moving to New Orleans and working in fine dining he opened Turkey and the Wolf, which featured his larger-than-life interpretations of down-home dishes and created a nationwide sensation.In Turkey and the Wolf, Hereford shares lively twists on beloved Southern dishes, like potato chip–loaded fried bologna sandwiches, deviled-egg tostadas with salsa macha, and his mom’s burnt tomato casserole. This cookbook is packed with nostalgic and indulgent recipes, original illustrations, and bad-ass photographs. Filled with recipes designed to get big flavor out of laidback cooking, Turkey and the Wolf is a wild ride through the South, with food so good you’re gonna need some brand-new jeans.