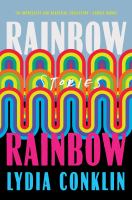 Capturing both the dark and lovable sides of the human experience, a collection of humurous and heartrending stories follows queer, trans and gender-nonconforming characters as they seek love and connection.--

Conklin's debut story collection follows LGBTQ+ characters coming into their own amidst defining experiences in their lives and shifts in relationships with themselves and those around them. In the memorable "Laramie Time," Leigh agrees, at long last, to take the plunge into parenthood with her partner, Maggie, after the two move from New York to rural Wyoming. A newly successful cartoonist, Leigh is at first happy to put their plans in motion, but the decision begins to reveal uneasy doubts about their relationship and competing concealed desires. A number of the stories feature young people exploring burgeoning identities and sexuality. "The Black Winter of New England" follows a trio of friends as they test the boundaries and façades of adolescence and friendship during an illicit New Year's Eve party. In "Ooh, the Suburbs," teens Heidi and Kim sneak out one night to meet up with a mysterious older woman whom Kim has befriended online. Embracing eagerness and insecurity, doubt and fortitude, Conklin's 10 tales resonate through the characters' dynamic moments of realization. Copyright 2022 Booklist Reviews.

A collector of honors, with Stegner, Rona Jaffe, and three Pushcart Prizes among them, Conklin offers a Rainbow Rainbow of short stories about queer, gender-nonconforming, and trans characters like the fifth grader who explores gender identity by dressing as an ox—instead of a matriarch—for a school reenactment of the Oregon Trail. After closing out her twice Booker-honored "Wolf Hall" trilogy, Mantel limns the transformative aspects of childhood in the loosely autobiographical stories of Learning To Talk. Author of the New York Times best-selling Three Women and the deliciously contentious debut novel Animal, a personal favorite, Taddeo offers stories (two Pushcart Prize-winning) grounded in the dating service Ghost Lover, a forwarding system for text messages (75,000-copy first printing). In The Angel of Rome, Beautiful Ruins author Walter highlights crucial moments in the lives of his characters, from a teenage girl aspiring to be like her missing mother to a son who must come out repeatedly to a father facing dementia. Copyright 2021 Library Journal.

DEBUT A winner of Rona Jaffe, and Pushcart Prizes honors, Conklin offers a first collection presenting queer, gender-nonconforming, and trans characters in a series of briskly told narratives. Here, fifth grader Coco happily ends up being an ox rather that a matriarch in school reenactment of the Oregon Trail, appalling her parents and bringing forth giggles from classmates. But she's happy with her role—"What she wanted to be was a boy. Like Devon or Alex, but nice"—and not only does she not die in the play (like so many of the pioneers) but she ends up able to challenge her obnoxious nickname. Elsewhere, a woman who has triumphed with her comic strip about lesbian turtles while anxiously resisting having a child with her lover, Maggie, finally succumbs to the idea. But at the last moment, she quietly sabotages the effort, knowing that she's wrecking the relationship but realizing that she has been manipulated. VERDICT Throughout, Conklin is gracefully multi-note as they reveal the complexities of queer relationships, always allowing their characters to be themselves. Copyright 2022 Library Journal.

Conklin delves into moments of decision, loss, and self-discovery among a set of queer characters in this superior debut collection. In "Laramie Time," a lesbian cartoonist agrees to pursue motherhood with her girlfriend and finds that the planning process defies her expectations. Conklin refreshingly illuminates the anxieties and longings of the early pandemic in "Pink Knives," in which a nonbinary narrator in an open relationship navigates a hookup before having top surgery. In the collection's most aching entry, "Sunny Talks," a secretly nonbinary person chaperones their out trans nephew, who is a minor YouTube celebrity, at a convention for trans vloggers. Conklin brings nuance and compassion to the subject matter and displays a captivating interest in human contradiction. Conklin's command of structure ensures that each story has a satisfying arc, but most impressive is the author's precise and evocative prose. Striking images dot the collection like jewels, as in "A Fearless Moral Inventory," about a sex addict who swears off an annual street fair: "The sun was a red rip on the horizon, gilding the doughnut of the sleeping ferrets in their cage." This talented writer is brimming with skills and heart. Agent: Samantha Shea, Georges Borchardt. (May) Copyright 2022 Publishers Weekly.

Capturing both the dark and lovable sides of the human experience, a collection of humurous and heartrending stories follows queer, trans, and gender-nonconforming characters as they seek love and connection.

Capturing both the dark and lovable sides of the human experience, a collection of humurous and heartrending stories follows queer, trans and gender-nonconforming characters as they seek love and connection.

A fearless collection of stories that celebrate the humor, darkness, and depth of emotion of the queer and trans experience that's not typically represented: liminal or uncertain identities, queer conception, and queer joyIn this exuberant, prize-winning collection, queer, trans, and gender-nonconforming characters seek love and connection in hilarious and heartrending stories that reflect the complexity of our current moment. A nonbinary writer on the eve of top surgery enters into a risky affair during the height of COVID. A lesbian couple enlists a close friend as a sperm donor, plying him with a potent rainbow-colored cocktail. A lonely office worker struggling with their gender identity chaperones their nephew to a trans YouTube convention. And in the depths of a Midwestern winter, a sex-addicted librarian relies on her pet ferrets to help resist a relapse at a wild college fair. Capturing both the dark and lovable sides of the human experience, Rainbow Rainbow establishes debut author Lydia Conklin as a fearless new voice for their generation.