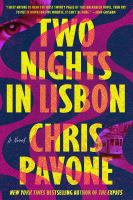 Ariel Price wakes up in Lisbon, alone. Her husband is gone--no warning, no note, not answering his phone. Something is wrong. She starts with hotel security, then the police, then the American embassy, at each confronting questions she can't fully answer: What exactly is John doing in Lisbon? Why would he drag her along on his business trip? Who would want to harm him? And why does Ariel know so little about her new--much younger--husband? The clock is ticking. Ariel is increasingly frustra...ted and desperate, running out of time, and the one person in the world who can help is the one person she least wants to ask.

*Starred Review* As was stunningly evident in his two Kate Moore thrillers (The Expats, 2012, and The Paris Diversion, 2019), Pavone has that special ability to construct plots that are artworks in their own right, marvels of architecture and intelligence. He's at it again in this jaw-dropping thriller about a woman, Ariel Pryce, who wakes up in Lisbon to find her husband, financial consultant John Wright, missing and possibly kidnapped. Much frustration follows, as the Lisbon police and those at the American Embassy doubt Ariel's version of what happened. As we learn more of Ariel's backstory, including the reason why she is reluctant to ask for help from a politician she knew in her life before John, we go all in for this woman who has survived abuse from multiple men and who has reinvented herself several times, moving from a failed actress to rich man's wife to "pregnant woman with no money and no assets and no skills and no job." And, throughout it all, she has been "a disbelieved woman." Not this time, we think, even though we sort of know Pavone could be setting us up. (Pro tip: Pavone is always setting us up.) However, like the great Ross Thomas, Pavone uses byzantine plotting to do more than exhaust his readers; with all their surprises, his plots are finally tools to reveal character. Another jewel in an already-bedecked crown. Copyright 2022 Booklist Reviews.

In Barclay's Take Your Breath Away, Andrew Mason is suspected of murdering wife Brie after she disappears, and further complications arise when someone resembling her shows up at the couple's old address before vanishing again (100,000-copy first printing). First seen in Brown's 2021 New York Times best seller, Arctic Storm Rising, former U.S. Air Force officer Nick Flynn now faces a Countdown to Midnight, with Midnight the code name for a secret project between Russia and Iran involving a lethal new weapon (125,000-copy first printing). In Burke's Every Cloak Rolled in Blood, novelist Aaron Holland is guided by the ghost of his recently deceased daughter when his do-gooding efforts draw him into a shady crowd that includes a former Klansman, a not-so-saintly minister, some scary fake-evangelical bikers, and a murderer (100,000-copy first printing). In Carr's In the Blood, a Mossad operative known to former Navy SEAL James Reece is killed in a plane explosion (she herself had just completed a targeted assassination), but searching for the culprit might mean walking into a trap (200,000-copy first printing). In Horowitz's third James Bond outing, as yet Untitled, 007 is starting to question his role as the Cold War wears on but agrees to act as a double agent so that he can infiltrate a newly hatched Soviet intelligence organization (50,000-copy first printing). Unfolding 15 years after events in Iles's "Natchez Burning" trilogy, Southern Man reintroduces Penn Cage, back in action as shots fired at a Bienville music festival nearly kill his daughter, a militant Black group takes responsibility for the torching of antebellum mansions, and a close friend is shot to death by a county deputy (200,000-copy first printing). Her career stumbling, lawyer Nicole Muller gladly complies when she's asked by the exclusive women's professional group Panthera Leo to Please Join Us, but as author McKenzie soon reveals, membership comes at a price (60,000-copy first printing). Demoted from the elite Hawks police unit for being too keen on uncovering state corruption, Meyer's stalwart detectives Benny Griessel and Vaughn Cupido await transfer from Cape Town to dull duty in Stellenbosch when an anonymous warning and a missing-student assignment reveal that The Dark Flood of corruption they knew was there is worse than they imagined. On a business trip with her new, much younger husband, Pavone's latest heroine, Ariel Price, can't enjoy her Two Nights in Lisbon; she awakens one morning to find her spouse missing and begins to realize that she hardly knows him (200,000-copy first printing). Edgar-nominated for The Impossible Fortress and also the editor behind Pride and Prejudice and Zombies, Rekulak returns with Hidden Pictures, featuring a nanny whose five-year-old charge draws increasingly creepy and sophisticated pictures (shown in the text) hinting at a long-ago murder (250,000-copy first printing). A woman lies murdered, surrounded by Dark Objects that include the book How To Process a Murder by forensics expert Laughton Rees, who's of course immediately called to the scene; the latest from "Sanctus" author Toyne (50,000-copy first printing). Copyright 2021 Library Journal.

Ariel Pryce wakes up in a Lisbon hotel room and her husband is gone; no note, no explanation. She exoects John to appear any minute. When he doesn't show up for breakfast, Ariel panics. She approaches hotel security for help, then the Lisbon police, and finally the American embassy. The police are asking too many questions, and Ariel doesn't have the answers. Then the ransom call arrives, and a desperate Ariel takes matters into her own hands. Pavone's newest international thriller (after The Paris Diversion) is as long as it is tedious. Ariel is long-suffering, and her history is laid out in excruciating detail, including her previous marital woes and many heartbreaking sexual assaults. Despite the quick back-and-forth between past and present, and the deluge of characters, the story turns out to have an interesting and unexpected conclusion. VERDICT Fans of Chris Bohjalian's Cassie Bowden and Camilla Läckberg's Faye Adelheim may be sympathetic to Ariel's plight and able to overlook the high page count.—Carmen Clark Copyright 2022 Library Journal.

A suspicious kidnapping in Lisbon, Portugal, drives this excellent thriller from Edgar winner Pavone (The Paris Diversion). When American businessman John Wright vanishes one morning from his hotel, his wife, Ariel Pryce, insists he was kidnapped, but issues soon emerge that make both the Lisbon police and the CIA skeptical. Why, for instance, are there no witnesses or video evidence of a crime taking place? Why did Pryce, whose account of the incident is fuzzy, change her legal name a decade earlier? And what's to be made of Wright's short stretch in the CIA a while back? When Pryce comes up with €2 million for a ransom payoff, the web leads investigators to the bank account of the current U.S. treasury secretary, who's soon to become the U.S. vice president and has a past that could subject him to blackmail. Pavone skillfully layers plot details, often shifting points of view, all the way to the end of this superior, elegantly crafted yarn. The enigmatic central character, whose moral compass is set a bit differently than most, sets this above the pack. Agent: David Gernert, Gernert Company. (May) Copyright 2022 Publishers Weekly.

"A dazzling literary thriller about a woman whose husband is kidnapped and held for ransom while they are visiting Portugal, leaving her no choice but to reach out to the one person she fears most"--

Waking up in Lisbon alone, her husband gone with no warning, no note, not answering his phone, Ariel Price, sensing something is wrong, realizes she knows so little about her new, much younger husband, and discovers just how far she’ll go when everything is on the line. 200,000 first printing.

Tautly wound and expertly crafted, Two Nights in Lisbon is New York Times bestselling and award-winning author Chris Pavone’s harrowing Hitchcockian novel of a woman under pressure -- how she acts, who believes her, and what she will resort to when everything is on the line.

AN INSTANT NEW YORK TIMES AND NATIONAL BESTSELLER. "There’s no such thing as a book you can’t put down, but this one was close." —Stephen King"Smart suspense at its very best." —John GrishamTautly wound and expertly crafted, Two Nights in Lisbon is a riveting thriller about a woman under pressure, and how far she will go when everything is on the line.You think you know a person . . .Ariel Pryce wakes up in Lisbon, alone. Her husband is gone—no warning, no note, not answering his phone. Something is wrong.She starts with hotel security, then the police, then the American embassy, at each confronting questions she can’t fully answer: What exactly is John doing in Lisbon? Why would he drag her along on his business trip? Who would want to harm him? And why does Ariel know so little about her new—much younger—husband?The clock is ticking. Ariel is increasingly frustrated and desperate, running out of time, and the one person in the world who can help is the one person she least wants to ask.With sparkling prose and razor-sharp insights, bestselling author Chris Pavone delivers a stunning and sophisticated international thriller that will linger long after the surprising final page.