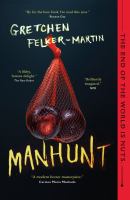 "Beth and Fran spend their days traveling the ravaged New England coast, hunting feral men and harvesting their organs in a gruesome effort to ensure they'll never face the same fate. Robbie lives by his gun and one hard-learned motto: other people aren't safe. After a brutal accident entwines the three of them, this found family of survivors must navigate murderous TERFs, a sociopathic billionaire bunker brat, and awkward relationship dynamics--all while outrunning packs of feral... men, and their own demons"--

*Starred Review* Felker-Martin's latest novel serves as a corrective to the various gender-based plague dystopias that never take into account the existence of trans people. After T-day, any human with too high a level of testosterone is transformed into a vicious, feral monster that attempts to kill anyone in sight. Fran and Beth are two trans women eking out an existence as manhunters, harvesting the testes of feral men for their friend Indi to render into estrogen and other hormones for wealthy bunker clients. Fran and Beth's precarious existence dodging packs of men and trans-exclusionary radical feminist (TERF) gangs is transformed when they encounter Robbie, a lone trans man who has been living in almost complete isolation with only his rifle for company. The three of them, along with Indi, have to figure out a new safe haven for themselves as the TERFs take over Boston, passing through the bunkers of the wealthy and the enclaves of trans survivors alike. Felker-Martin's self-described filthcore prose easily conjures the grotesque horrors both internal and external that these beleaguered trans survivors pass through on their desperate search for some brief moment of security. Highly recommended for those looking for particularly upsetting or disturbing horror fiction. Copyright 2021 Booklist Reviews.

DEBUT Beth and Fran are in the woods, on the run from monsters—some created by a virus that turns any human with enough testosterone into a zombie-like creature; others from an organized group of women ruled by a violent brand of anti-trans hate. Beth and Fran are not helpless, however. They are skilled hunters, seeking the valuable, estrogen-rich testicles of the infected men to bring back to their friend Indi, a doctor who is distilling E for medicinal purposes. So begins this compelling, fast-paced, and tense postapocalyptic tale of a band of survivors fighting off villains and struggling to find safety, featuring stellar worldbuilding and complex, fully developed characters. The original frame, a testosterone-driven plague, opens the door for Felker-Martin to probe the popular zombie trope while simultaneously centering the experience of trans men and women. The result is a sensual, tender, honest, and inspirational story of imperfect but well-meaning people banding together in an attempt to not only survive but thrive. VERDICT This novel confidently plants a flag declaring its place among the greatest band-of-survivor zombie tales, right beside thought-provoking, action-packed classics such as The Rising, by Brian Keene, Zone One, by Colson Whitehead, and Mira Grant's "Newsflesh" series. Copyright 2021 Library Journal.

Felker-Martin's daring debut imagines a world in which a plague turns men into violent cannibals and those left alive must do whatever they can do survive, including—in the case of trans women like Beth and Fran—harvesting men's genitals to keep the disease at bay themselves. The two meet up with Robbie, a gunslinging trans man bearing his own trauma, and together the three seek safety, facing waves of feral men, heavily armed TERFs (trans-exclusionary radical feminists) hell-bent on bringing about the extinction of trans women, and the labyrinthine dynamics of their own relationships as they process their brutal histories. Felker-Martin's horror chops are top-notch, with gut-churning prose zoomed in on the strangeness of human bodies and on the characters' squeamish relationships with the physical realm, and her exploration of mental illness, trauma, and dysphoria excellently complement the grimy atmosphere. The plot, however, doesn't quite coalesce, with much of the narrative feeling like a series of vignettes lashed together, and it can be frustrating to process all the small-scale emotional beats without the clear vision of where the story might be heading. Still, this swings for the fences admirably. Fans of Poppy Z. Brite and Clive Barker should give this, well, ballsy postapocalyptic tale a shot. (Feb.) Copyright 2021 Publishers Weekly.

"Beth and Fran spend their days traveling the ravaged New England coast, hunting feral men and harvesting their organs...Robbie lives by his gun and one hard-learned motto: other people aren't safe. After a brutal accident entwines the three of them, this found family of survivors must navigate murderous TERFs, a sociopathic billionaire bunker brat...all while outrunning packs of feral men, and their own demons"--

“A modern horror masterpiece.” —Carmen Maria Machado, author of In the Dream HouseGretchen Felker-Martin's Manhunt is an explosive post-apocalyptic novel that follows trans women and trans men on a grotesque journey of survival.“Disgustingly rendered and brilliantly imagined.” —NPR“Keeps up a relentless velocity while just being plain fun as hell.”—Torrey Peters, author of Detransition, BabyBeth and Fran spend their days traveling the ravaged New England coast, hunting feral men and harvesting their organs in a gruesome effort to ensure they'll never face the same fate.Robbie lives by his gun and one hard-learned motto: other people aren't safe.After a brutal accident entwines the three of them, this found family of survivors must navigate murderous TERFs, a sociopathic billionaire bunker brat, and awkward relationship dynamics—all while outrunning packs of feral men, and their own demons."A filthy, furious delight."—The New Yorker