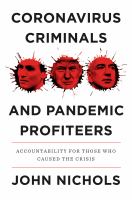 "In 2020, hundreds of thousands of coronavirus deaths were caused not by the vicissitudes of nature but by the callous and opportunistic decisions of powerful people, as revealed here by John Nichols"--

Journalist Nichols (The Fight for the Soul of the Democratic Party) delivers a blistering rebuke of politicians and private corporations for exacerbating the Covid-19 pandemic. He cites a Columbia University study showing that President Trump's refusal to take "urgent action" in March 2020 led to 54,000 avoidable deaths in the early stages of the pandemic, and argues that Vice President Mike Pence's history of ignoring an HIV outbreak as governor of Indiana should have disqualified him from leading the White House's coronavirus task force. Secretary of State Mike Pompeo, meanwhile, tried to pressure South Africa and other countries not to accept much-needed medical aid from Cuba. Nichols also alleges that vaccine manufacturer Pfizer maximized profits at the expense of underserved communities around the world and blames Democratic politician Rahm Emanuel for promoting neoliberal trade policies that gutted U.S. manufacturing and led to a critical shortfall in masks and other medical supplies. Citing the example of the 1932–1934 Senate investigation into the causes of the Great Depression, Nichols calls for a "reckoning" against those who chose "political advantage or personal profit over human life and shared prosperity." Well researched and brisk, this damning exposé pulls no punches. (Jan.) Copyright 2021 Publishers Weekly.

Looks at the people who made the COVID-19 pandemic more acute, from President Donald Trump to corporations like Facebook, Visa, and Pfizer who were able to use the crisis to further enrich their bottom lines.

"In 2020, hundreds of thousands of coronavirus deaths were caused not by the vicissitudes of nature but by the callous and opportunistic decisions of powerful people, as revealed here by John Nichols"--

Hundreds of thousands of deaths were caused not by the vicissitudes of nature but by the callous and opportunistic decisions of powerful people, as revealed here by John Nichols.

On March 10, 2020, president Donald Trump told a nation worried about a novel coronavirus, “We’re prepared, and we’re doing a great job with it. And it will go away. Just stay calm. It will go away.” It has since been estimated that had Trump simply taken the same steps as other G7 countries, 40 percent fewer Americans would have died.

And it was not just the president. His inner circle, including Mike Pence and Jared Kushner, downplayed the crisis and mishandled the response. Cabinet members such as Betsy DeVos and Mike Pompeo undermined public safety at home and abroad to advance their agendas. Senators Ron Johnson and Mitch McConnell, governors Kristi Noem and Andrew Cuomo, judges such as Wisconsin Supreme Court justice Rebecca Bradley all promulgated public policies that led to suffering and death. Meanwhile, profiteer Pfizer (and anti-government propagandists such as Grover Norquist) fed at the public trough, while the billionaire Jeff Bezos added pandemic profits to a grotesquely bloated fortune.

John Nichols closes with a call for a version of the Pecora Commission, which took aim at what Franklin Delano Roosevelt called the “speculation, reckless banking, class antagonism, and profiteering” that stoked the Depression. There must be accountability.