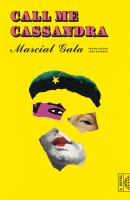 "A darkly magical tale of a haunted young dreamer, born in the wrong body and time, and believing himself to be a doomed prophetess from ancient Greek mythology"--

*Starred Review* As in The Black Cathedral (2020), Cuban writer Gala sets his newest work of magical realism in his hometown of Cienfuegos. This tale dramatizes the parallels between Cassandra, the Trojan princess and prophet involved in the Trojan War, and the coming-of-age of a closeted transgender Cuban and his involvement in the Angolan Civil War. The nonlinear plot follows Raúl Iriarte, a blond and blue-eyed Cuban enamored of poetry and classical literature who also happens to be a reincarnation of Cassandra. Raúl's resemblance to his pretty aunt Nancy, his feminine demeanor, and his father's controlling presence complicate matters as he grows up feeling unmoored in a feverish, late-1970s, Marxist-Leninist society on the brink of a violent revolution. Gala switches between shuffled time frames in Raúl's life, during which, like Cassandra, he is resigned to his fate and submits to the psychological and sexual abuse inflicted by those close to him. The appearance of mythical beings during opportune times, Raúl's pitiless predictions, and the unfolding events of a fraught time in Cuban history contribute to the power of Gala's creative spin on an indelible myth and imaginative, memorable, and heartbreaking tale of identity and fatalism. Copyright 2021 Booklist Reviews.

Author of the international award winner The Black Cathedral, published in the United States in 2020, Cuban novelist/poet Gala investigates the failures of Cuba's revolution through visionary ten-year-old Rauli. Rauli doesn't fit in at home or at school, perhaps with good reason. He knows that he was born in the wrong body, that he will die at age 18 as a soldier in Angola, and that he is the reincarnation of the Trojan princess and doomed seer Cassandra. Copyright 2021 Library Journal.

In Cuban poet and novelist Gala's lyrical and elegiac return (after The Black Cathedral), a young man grows up feeling stifled by life in Castro's Cuba. At 10, Rauli Iriarte is effeminate and bookish, imperiled by the strict gender roles embodied by his violent brother, drunken father, and unsympathetic school board. He's more comfortable in the company of his mother and his father's Russian mistress, Svetlana. As it happens, Rauli is also Cassandra, the Greek prophetess of ancient myth, cursed with the knowledge that he will die as a young soldier in Angola, where he is dispatched as part of the Cuban Intervention. There, on "a continent full of ghosts, the ghosts of kings, dark ghosts of dark wizards," he is simultaneously swept up in the Trojan War and forced to relive The Iliad's cycle of death and carnage. Lodged irrevocably between genders, historical periods, and legends, Rauli—who'd rather be acknowledged as Cassandra—must find meaning and purpose in a life he knows to be tragically foreshortened. It's a fascinating premise, but not a whole lot happens. Still, Gala's prose, elegantly translated by Kushner, perfectly conveys the protagonist's dual realities ("We are but shadows set on the canvas of this life, my Zeus," he thinks, while on the battlefield). In the end, the author offers a singular invocation of immortality. (Jan.) Copyright 2021 Publishers Weekly.

"A darkly magical tale of a haunted young dreamer, born in the wrong body and time, and believing himself to be a doomed prophetess from ancient Greek mythology"--

A young boy in 1970s Cuba searches for his identity as he moves from childhood to adolescence firmly believing he was born in the wrong body and that he is the reincarnation of the Trojan princess Cassandra. 15,000 first printing.

“Dazzling." —Marcela Valdes, The New York Times Book Review (Editors' Choice)"A spellbinding novel by one of the best writers of the Americas." —Junot Díaz, author of This is How You Lose HerTen-year-old Rauli lives in a world that is often hostile. His older brother is violent; his philandering father doesn’t understand him; his intelligence and sensitivity do not endear him to the other children at school. He loves to read, especially Greek myths, but in Cuba in the 1970s, novels and gods can be dangerous. Despite the signs that warn Rauli to repress and fear what he is, he knows three things to be true: First, that he was born in the wrong body. Second, that he will die, aged eighteen, as a soldier in the Cuban intervention in Angola. And third, that he is the reincarnation of the Trojan princess Cassandra.Moving between Rauli’s childhood and adolescence, between the Angolan battlefield, the Cuban city of Cienfuegos, and the shores of ancient Troy, Marcial Gala’s Call Me Cassandra tells of the search for identity amid the collapse of Cuba’s utopian dreams. Burdened with knowledge of tragedies yet to come, Rauli nonetheless strives to know himself. Lyrical and gritty, heartbreaking and luminous, Rauli’s is the story of the inexorable pull of destiny.