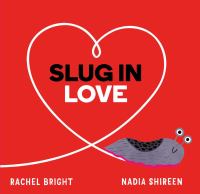 Doug the slug is looking for a hug and soon finds there is a friend for everyone.

A solitary purple slug called Doug is the unlikely star of this silly story about finding companionship. Seeking a hug, Doug first grins hopefully at an ant, an earthworm, and others, but their rejection is decisive: "But who wants to hug/ a slug called Doug?// No one. That's who./ Not him.// Not me./ Not you." When Doug meets a bespectacled snail with full red lips, it would seem she's the One: a series of Polaroids comically envisions the course of their romance, including a getaway to the Eiffel Tower. Unfortunately, the union fails and Doug is left weeping—that is, until an unexpected ladybug appears, and he learns that love can arrive when least expected. Shireen's bright, bold illustrations pair with Bright's wry, rhyming narration, which embraces bolded text, italics, and capitalization for readaloud effect. Ages 4–8. (Dec.) Copyright 2021 Publishers Weekly.

K-Gr 2—Doug the slug is in desperate need of a hug. But who will give him one? The ant says he's too "grimy, slippy" and the spider thinks he is "icky mucky." The worm feels that he is too "squelchy, slimy" and the bug thinks he is "yucky, sticky!" Even the snail, who is a lot like Doug, will not give him what he is looking for. What is a poor slug to do? The answer comes in the form of an unexpected friend, at an unexpected time. This funny picture book is a great reminder that friends come in all shapes and sizes. Using a bold palette that changes as Doug's feelings evolve, the illustrations really takes center stage. The animals are created using simple shapes, but the careful details in the eyes and lips add humor and character. The use of comic panels and dialogue bubbles is easy for young readers to navigate. The text relies on spare language and "feeling" words that will expand vocabulary. Rhyming couplets are used throughout, but not consistently; that might be most noticeable when reading aloud. VERDICT A succinct tale with a strong message about friendship, this book makes a nice addition to most K–2 collections.—Louie Lauer Copyright 2021 School Library Journal.

In this adorable rhyming picture book that is perfect for Valentine’s Day, Doug the lonesome slug searches for love and learns that there truly is a friend for everyone. Simultaneous eBook. Illustrations.

From the bestselling author of Love Monster comes the irresistible story of one slug’s search for love in this endearing rhyming picture book perfect for Valentine’s Day!Doug the slug needs a hug. But who wants to hug a slug called Doug? After a long search for someone to snuggle, lonesome Doug is ready to give up hope. But you never know when love might come flying by! Young readers will love this funny and fabulous tale that shows there’s a friend for everyone.