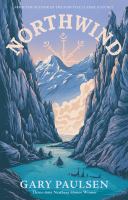 When sickness decimates his fishing village, an orphan named Leif flees north in a cedar canoe, journeying along a brutal but beautiful coastline.

*Starred Review* Call this posthumously published novel The Young Man and the Sea (pace Ernest Hemingway) and you'll have a pretty good idea what this survival story is about. The hero of this maritime Hatchet is an orphan named Leif, whose life changes when a deadly plague descends upon his fishing village. To save him and another young boy, Old Carl puts the two kids into a canoe and tells Leif to paddle north to where the air is clear and clean. And so Leif does, but not before the illness finds him and his companion. Sadly, the younger boy dies, but Leif, who becomes deathly ill, recovers to continue his voyage. Paulsen once again demonstrates his extraordinary knowledge of nature and the outdoors as he creates Leif's often-dangerous journey, one that is plagued by huge bears, a whirlpool, unfriendly ocean currents, and more. As he survives various obstacles, Leif begins to feel at one with nature and an ineluctable joy, an emotion that readers will likely find in the pages of this splendid story. Beautifully written, it's classic Paulsen at his best. Grades 5-8. Copyright 2022 Booklist Reviews.

Inspired by the late Paulsen's lifelong love of the sea and his own journey up the Pacific coast, this captivating saga of survival and self-discovery, his final novel, centers a steadfast and levelheaded child in an apparently Nordic archipelago landscape. After growing up on fishing boats, orphan Leif is abandoned at a fish camp; when the camp's men become infected with cholera, its leader instructs the 12-year-old to head north to safety in a canoe. Finding himself alone with few supplies in early summer, Leif struggles to survive along shorelines and inlets that teem with bears and whales, all described with Paulsen's characteristic attention to detail. As the solitary child travels via canoe, carving his experiences into a piece of wood and dreaming of a mother he never met, he realizes that though "all his life... had not been a safe place," the vast world is his to explore. Spare, survival-oriented prose keeps the reader immersed in scenes difficult and wondrous, offering a glimpse of the sheer awesomeness of nature, showcasing the beauty of the sea and its inhabitants, and regaling readers with a timeless and irresistible adventure that has resilience at its heart. Ages 10–14. (Jan.) Copyright 2021 Publishers Weekly.

Forced to take to the water after a deadly plague wipes out his fishing village, Leif connects to the heartbeat of the ocean and the pulse of the landscape as he discovers his truest self. 75,000 first printing. Simultaneous eBook.

When sickness decimates his fishing village, an orphan named Leif flees north in a cedar canoe, journeying along a brutal but beautiful coastline.

This stunning New York Times Bestseller from the survival story master, set along a rugged coastline centuries ago, does for the ocean what Hatchet does for the woods, as it relates the story of a young person’s battle to stay alive against the odds, where the high seas meet a coastal wilderness. When a deadly plague reaches the small fish camp where he lives, an orphan named Leif is forced to take to the water in a cedar canoe. He flees northward, following a wild, fjord-riven shore, navigating from one danger to the next, unsure of his destination. Yet the deeper into his journey he paddles, the closer he comes to his truest self as he connects to “the heartbeat of the ocean . . . the pulse of the sea.” With hints of Nordic mythology and an irresistible narrative pull, Northwind is Gary Paulsen at his captivating, adventuresome best.