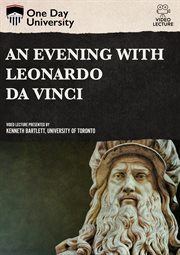 An evening with Leonardo Da Vinci

One Day University presents a series of video lectures recorded in real-time from some of the top minds in the United States. Given by award-winning professors and experts in their field, these recorded lectures dive deep into the worlds of religion, government, literature, and social justice. What creates and drives genius? Why are some geniuses universal in their ability and others focused on a single discipline or interest? This video lecture will investigate perhaps the most remarkable unive...rsal genius produced by the Italian Renaissance-or any other historical period. Leonardo da Vinci was a painter, sculptor, military and civil engineer, experimental scientist, and courtier. His work remains among the most celebrated in the history of art, as his Mona Lisa is the single most famous painting in the world; and his speculation on human flight, military machines, and huge public works, such as diverting rivers, operate on a scale previously unimaginable. This video lecture will follow the remarkable man from his birth, the illegitimate son of a minor notary in a provincial town, to his death in France where he had been given a castle by his last great patron, King Francis I. At the end of this presentation, viewers will have learned about many of da Vinci's major accomplishments, and how one man succeeded in bringing together all of the perspectives and ambitions of the Renaissance as well as establishing the platform that would create the modern world: experimentation and the precise observation of the natural world and the human condition.