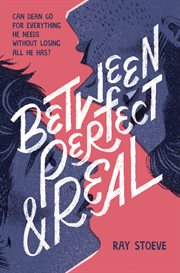 Between perfect and real

A moving YA debut about a trans boy finding his voice-and himself Dean Foster knows he's a trans guy. He's watched enough YouTube videos and done enough questioning to be sure. But everyone at his high school thinks he's a lesbian-including his girlfriend Zoe, and his theater director, who just cast him as a "nontraditional" Romeo. He wonders if maybe it would be easier to wait until college to come out. But as he plays Romeo every day in rehearsals, Dean realizes he wan...ts everyone to see him as he really is now-not just on the stage, but everywhere in his life. Dean knows what he needs to do. Can playing a role help Dean be his true self? Ray Stoeve is a queer, nonbinary writer from Seattle, Washington. They received a 2016-2017 Made at Hugo House Fellowship for their young adult fiction. When they're not writing, they can be found baking, gardening, making art in other mediums, or hiking their beloved Pacific Northwest. They live in an intentional community in Seattle with their partner and chosen family. This is their debut novel.

*Starred Review* Dean has known for a while that he's a trans guy, but he's not out—not to his friends; his girlfriend, Zoe; or his parents, and certainly not to his castmates in the school production of Romeo and Juliet, in which he was recently cast as Romeo. Everyone thinks Dean's a lesbian, and he's intent on keeping it that way until he can get into NYU and escape with Zoe to New York City. But as he gets deeper into his role of Romeo, he realizes that finally being able to perform on stage as a guy might be just what he needs to gain the courage to come out. In this dazzling debut, Stoeve paints an empathetic picture of a coming-out experience populated with lovable, flawed supporting characters. Difficult, raw moments between Dean and his parents—who didn't react well when he told them he was a lesbian—and between Dean and Zoe are offset by his relationships with a diverse found family of compassionate LGBTQ+ friends who support and accept him, a rare gem in young adult literature. Dean's story is tender, emotional, honest, and unafraid to face both the pain and joy of coming out. Through Dean's authentic and hopeful voice, Stoeve expertly crafts a powerful exploration of who we can become when we have the courage to choose our own paths. Grades 9-12. Copyright 2021 Booklist Reviews.

After being cast as Romeo in the school play, Dean realizes he wants everyone to see him as he really is, a male, and not just play one on the stage, despite the risk of losing everything.

Dean Foster knows that he’s a trans man. He's watched enough YouTube videos and done enough questioning to be sure. But everyone at his high school thinks he’s a lesbian—including his girlfriend Zoe. Maybe he can just wait to openly transition until he’s off at college. Besides, he's got enough to worry about: He’s cast as Romeo in the school play (in what the theater teacher thinks is an interesting gender swap), he’s falling in love with Zoe, and he's applying to the NYU theater program. It’s not everything, but it’s pretty good. But playing a boy every day in rehearsals, Dean realizes he wants everyone to see him as he really is now––not just on the stage, but everywhere in his life. Emboldened by stepping out on the stage as Romeo each day and the trans youth support group he's started attending, he knows what he needs to do. The only question remains: can he try to achieve everything he needs without losing all he has?