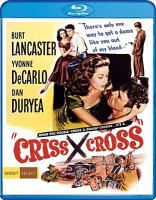 Burt Lancaster stars as a hardworking armored car driver with a fatal attraction to his ex-wife, Ann, now married to notorious hoodlum Slim Dundee. Unable to keep himself from her, Lancaster has a secret tryst with Ann, only to be discovered by Dundee. To cover up their affair, Lancaster convinces the hoodlum that he only met Ann to get Dundee's help in robbing an upcoming payroll shipment he will be driving. The hood falls for the lie, which triggers a series of dark and foreboding events....