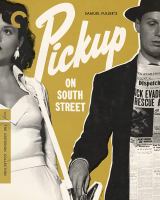 Petty crook Skip McCoy has his eye set on the big score. When the three-time convict picks the pocketbook of unsuspecting Candy, he finds a haul bigger than he ever could have imagined: a strip of microfilm bearing confidential U.S. secrets. Tailed by the Feds and the unwitting courier's Communist puppeteers, Skip and Candy find themselves in a precarious gambit that pits greed against redemption.