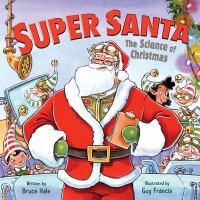 Super Santa The science of Christmas

In this eye-opening picture book, the science and engineering behind the extraordinary things Santa achieves every Christmas in order bring millions of presents to children around the world are revealed.

Along with inviting readers to consider some big numbers—How far would Santa have to travel to deliver a billion presents to about 200 million homes? Around 20 million miles!—Hale gives the teeming crew of elves, headed by capable gadgeteer Mrs. Claus, kudos for not only making all those gifts but also making sure that all nine (yes, nine) reindeer have nonskid hooves for all the rooftop landings and that the jolly driver wears proper safety gear. How does he do it in one night? In part, at least, by crossing the International Date Line, which gives him 31 hours of darkness—though how he manages to carry a million-ton payload or down 400 million cookies (and 200 million glasses of milk) is left for him to know. Sharp-eyed viewers will note, in Francis' exuberant cartoon scenes, that Santa's high-tech systems are state of the art, his red pants are fireproof, and those reindeer aren't the sleigh's only power source. A soaring tribute to an annual feat that combines magic, science, and engineering. Grades 1-3. Copyright 2021 Booklist Reviews.

The tech-savvy elven team behind the famous red suit explains the mechanics of how Santa delivers presents in one night. From the sheer number of gifts ("They could stretch three times around Earth") and resulting weight ("three Empire State Buildings") to St. Nick's suit (which "needs to handle all the heat and pressure that comes with such high-speed travel"), Hale conveys the science in snappy, easily digestible dialogue. Francis, who "used software to manipulate the composite photographs for this book," depicts various odds and ends needed to pull off the night in art that amplifies the author's jokes: spreads that include elves of various skin tones depict Santa Claw machinery and Super Sled Shox. A rollicking tale that explains how Santa's trip requires "a little science and engineering and a whole lot of Christmas magic." Ages 4–8. (Sept.) Copyright 2021 Publishers Weekly.

Gr 1–3—Visiting every good girl and boy on Christmas Eve is no easy feat, but with the right team on his side, Santa can achieve great things. Christmas Eve is fast approaching, and Santa's workshop is filled with the sights and sounds of countless elves making final preparations for the big night. From verifying the sturdiness of Santa's suit to adding extra grip to the reindeer's hooves, every element of the journey must be tested to ensure its success. When the conveyor belt jams, and Santa's departure is delayed, he must harness the power of science to make all of his deliveries on time. Anyone who has ever wondered just how Santa gets to every house on Christmas Eve carrying the amount of presents required will find a plethora of scientific explanations in this book. By using recognizable comparisons such as LEGO sets and the distance from the Earth to the moon, readers will easily comprehend the enormous magnitude of this annual feat. Santa is depicted as a chiseled, burly character, his physique able to withstand the G-forces he experiences on his travels. Santa and Mrs. Claus are depicted with light skin and rosy complexions, and they are surrounded by a diverse cast of elves. The computer-rendered images show more of the preparations than the text explains, offering a visually engaging backdrop to the story. VERDICT This STEM-oriented Christmas extravaganza speaks to elementary school-age readers and is a unique and entertaining take on Santa's iconic voyage.—Mary Lanni, formerly at Denver P.L. Copyright 2021 School Library Journal.

In this eye-opening picture book, the science and engineering behind the extraordinary things Santa achieves every Christmas in order bring millions of presents to children around the world are revealed. 35,000 first printing. Illustrations.

In this eye-opening picture book, the science and engineering behind the extraordinary things Santa achieves every Christmas in order bring millions of presents to children around the world are revealed.

How does Santa Claus manage to deliver Christmas presents to all the good boys and girls in just one night? Take a fun-filled look into the dizzying details of all the amazing things Santa accomplishes every Christmas in order to bring all those millions of presents around the world with Super Santa.When you’re opening up your perfect gift Christmas morning, have you ever wondered how that gift made it all the way from the North Pole to under your Christmas tree? How does Santa visit every good boy and girl in the whole world while carrying millions of presents in just one winter’s night? Between traveling at 730,000 miles per hour and chowing down on 400 million cookies in one night, Kris Kringle is a Christmas superhero!Take a peek behind the scenes into Santa’s workshop and discover how a little science and engineering and a whole lot of Christmas magic all work together to make this special day sparkle.