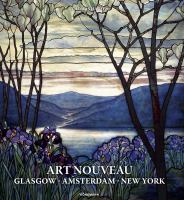 Art Nouveau developed in very different forms between the 1880s and the First World War, starting in Western Europe. Organic lines and plant forms, building in iron, glass, and concrete, as well as the idea of the 'Gesamtkunstwerk' (Complete work of art) can be found in London, Glasgow, and Riga as well as in St. Petersburg and Moscow. But above all in the Scandinavian countries and in Eastern Europe, Art Nouveau often developed into a young national style of its own, frequently with a return to regional traditions. In other countries, such as the Netherlands or the USA, the path seems to lead directly into Modernity, especially in architecture.