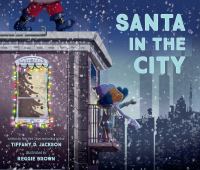 Santa in the city

"With a little help from her family, community, and Santa himself, a little girl's faith in the magic of Christmas is restored"--

*Starred Review* Deja loves Christmas, but some of her friends cast doubt on her faith in Santa Claus with their cold, nonbeliever logic. Once Deja gets home, she is on a mission to get all her questions about whether Santa Claus exists answered. She sits down with her mother, peppering her with questions about how Santa can get to all the world's homes—especially those without chimneys and reindeer parking. Her mother never falters in her assurances that Santa is real, and she takes Deja around their apartment building and all over the city to show the girl how Santa pulls off his Christmas magic. By Christmas Eve night, she's still not 100-percent convinced, so she sneaks into the living room to see Santa for herself. Unsurprisingly, she falls asleep while waiting, but she wakes up to find presents and a special letter from Santa that completely restores her belief. The cartoon illustrations are festive and inviting, capturing the urban setting festooned for the winter holidays and putting Black and brown-skinned characters (including Santa!) front and center. The representation in this work will win the hearts of many children looking to see themselves in Christmas stories. Jackson's picture-book debut is a winner for Santa skeptics and believers alike. Grades K-3. Copyright 2021 Booklist Reviews.

In her accessibly written picture book debut, Jackson centers Deja, a Black child of Jamaican descent who asks myriad questions regarding Santa's methods of reaching her city home. When classmates instill seeds of doubt, Deja worries about Santa's existence—and his limitations. Not only does her apartment lack a chimney, but her city does not look like classic Christmas towns: "Okay, but where does he park his sleigh? There's no free parking spots on our block at night and ain't none of them big enough for nine reindeers!" But as her mother, neighbors, and relatives offer reasonable explanations, Deja sees the light ("Makes sense"), and it's revealed that Santa, who is also Black, has no issues visiting. Warm, imaginative digital art by debut illustrator Brown offer a nuanced portrait of Deja's family and community in this reassuring book for any child who's ever worried about Santa's magic reaching them. Ages 4–8. (Oct.) Copyright 2021 Publishers Weekly.

K-Gr 2—Deja's friends tell her Santa isn't real. How can Santa navigate the city? Storybooks tell them Santa needs a chimney, a place to park his reindeer, and the North Pole is just too cold. How can Santa find Deja when she's visiting family in Jamaica? Full of questions and doubt, Deja peppers her mother and the other adults in her life with all of the aspects of Santa that she can't piece together. They each give her a plausible explanation with warmth and patience, but Deja decides she needs proof. Jackson, best known for her young adult thrillers, has created a delightful holiday story, especially for children who are beginning to question Santa's existence or who have wondered how Santa will find their apartment. The book is ideal for a read-aloud, though the short sentences would not be intimidating to beginning readers. Brown's cartoon-style illustrations are awash in purples, blues, and grays—not colors one would typically associate with a holiday story, but that fit perfectly in a book about Christmas in the city. VERDICT A good purchase for public and elementary school libraries, especially those in urban environments.—Monisha Blair, Glasgow M.S., Alexandria, VA Copyright 2021 School Library Journal.

"With a little help from her family, community, and Santa himself, a little girl's faith in the magic of Christmas is restored"--

Afraid that Santa might not be able to visit her, little Deja, with a little help from her family, community, and Santa himself, discovers that the Christmas spirit is alive and well in her city. Simultaneous eBook. Illustrations.

A little girl's belief in Santa is restored in this ode to the magic of Christmas. This is a holiday gift readers will treasure for years to come!It's two weeks before Christmas, and Deja is worried that Santa might not be able to visit her--after all, as a city kid, she doesn't have a chimney for him to come down and none of the parking spots on her block could fit a sleigh, let alone eight reindeer! But with a little help from her family, community, and Santa himself, Deja discovers that the Christmas spirit is alive and well in her city. With bold, colorful illustrations that capture the joy of the holidays, this picture book from award-winning author Tiffany D. Jackson and illustrator Reggie Brown is not to be missed.