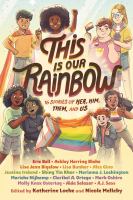 This is our rainbow 16 stories of her, him, them, and us

Featuring contributions from Eric Bell, Katherine Locke and A.J. Sass, this first LGBTQA+ anthology for middle-grade readers presents stories of queer fantasy, historical and contemporary stories for every letter of the acronym.

*Starred Review* Arguably the first queer anthology for middle-schoolers, this generous collection of 16 stories covers the LGBTQIA+ waterfront, featuring tales with gay, lesbian, bi, trans, gender fluid, and nonbinary characters. The types of stories are also varied and include traditional prose narratives, two graphic stories, and one in verse. Characters are a happy exercise in diversity, too, featuring those who are Black, white, and brown, and just over half of the stories' protagonists identify as cis female—a welcome departure from the historic prevalence of male leading characters—with five nonbinary, one cis male, and one transgender lead filling out the bill. Happily, the stories are uniformly excellent but there are, as always, some standouts. Lisa Bunker's "Petra and Pearl," for example, features two kids who are fellow fan-fic writers and long-distance friends. Gradually, the two, who write under girls' names, come to terms with the realization that each of them is a transgender girl, despite their transphobic families. Marieke Nijkamp's "Splinter and Ash" stars a teen, assigned female at birth, who longs to be a knight. But how? Might it have something to do with falling in love with the princess? And Mark Oshiro's "Guess What's Coming to Dinner" is, not to put too fine a point on it, a hoot. A handful of gay adults rounds out this fine collection. Grades 5-8. Copyright 2021 Booklist Reviews.

In this stellar middle grade anthology, editors and contributors Locke (What Are Your Words?) and Melleby (How to Become a Planet) assemble the works of 16 authors whose pieces present a wide range of LGBTQ experiences across genres and formats. In Justina Ireland's "I Know the Way," the story of a Black seventh grader's contemporary queer crush intertwines with a narrative about two enslaved women seeking freedom in Civil War Maryland. Aida Salazar's "Menudo Fan Club," the volume's sole poem, captures the melancholy of a speaker who is the only queer girl she knows. Some stories, such as "The Makeover," a comic by Shing Yin Khor, center on self-discovery and community; others, including "Petra & Pearl," Lisa Bunker's tale of two online friends realizing that they're trans, portray the pain of experiencing bigotry. In Katherine Locke's "The Wish & the Wind Dragon," the nonbinary pirate protagonist's gender feels incidental to the narrative. Intersectionally inclusive casts include characters of various abilities and ethnicities as well as kids who both name their identities and seem content without labels. The result is a strong amalgam of confidently written portraits that consider the joys, pains, and complexities that can come with being young and queer. Ages 8–12. Agent: Jim McCarthy, Dystel, Goderich & Bourret. (Oct.) Copyright 2021 Publishers Weekly Annex.

Gr 3–8—In this collection of prose, poetry, and comics from 16 notable middle grade creators, technique and tone run the gamut, from playful explorations of the mundane to thrilling sci-fi adventures to heartwrenching coming-of-age tales. A character with they/them pronouns grapples with the loss of a pet and learns that new beginnings don't devalue old furry friends in Alex Gino's "Purr-cle of Life," while seventh-grader Marcus turns back time to avoid his disastrous accidental coming out, eventually stepping into the inevitable conclusion on his own terms in Eric Bell's vivid "Come Out, Come Out, Whenever You Are." Other highlights include Mariama J. Lockington's "Devoyn's Pod," the poignant tale of Brooklyn-born Dev who finds her longest friendships shifting along with her understanding of herself and her neighborhood, and Molly Knox Ostertag's comic, "The Golem and the Mapmaker," in which a golem bound to the Emperor's will falls for his stubborn bride-to-be, leading both to a life of reclaimed freedom. Stories vary in length and content (some skew older, such as Marieke Nijkamp's "Splinter & Ash," which features two masked characters befriending each other through an act of heroism that involves an assault); readers of all ages and interests will find something to love among them. VERDICT This outstanding collection of LGBTQIA+ fiction is a worthy purchase for all collections serving tweens and teens.—Ashleigh Williams, School Library Journal Copyright 2021 School Library Journal.

Featuring contributions from Eric Bell, Katherine Locke and A.J. Sass, this first LGBTQA+ anthology for middle-grade readers presents stories of queer fantasy, historical and contemporary stories for every letter of the acronym.

The first LGBTQA+ anthology for middle-graders featuring stories for every letter of the acronym, including realistic, fantasy, and sci-fi stories by authors like Justina Ireland, Marieke Nijkamp, Alex Gino, and more!A boyband fandom becomes a conduit to coming out. A former bully becomes a first-kiss prospect. One nonbinary kid searches for an inclusive athletic community after quitting gymnastics. Another nonbinary kid, who happens to be a pirate, makes a wish that comes true--but not how they thought it would. A tween girl navigates a crush on her friend's mom. A young witch turns herself into a puppy to win over a new neighbor. A trans girl empowers her online bestie to come out. From wind-breathing dragons to first crushes, This Is Our Rainbow features story after story of joyful, proud LGBTQA+ representation. You will fall in love with this insightful, poignant anthology of queer fantasy, historical, and contemporary stories from authors including: Eric Bell, Lisa Jenn Bigelow, Ashley Herring Blake, Lisa Bunker, Alex Gino, Justina Ireland, Shing Yin Khor, Katherine Locke, Mariama J. Lockington, Nicole Melleby, Marieke Nijkamp, Claribel A. Ortega, Mark Oshiro, Molly Knox Ostertag, Aisa Salazar, and AJ Sass.