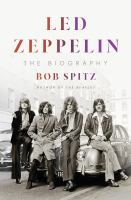 No one before or since has lived the rock star dream quite like Jimmy Page, Robert Plant, John Paul Jones, and John Bonham. Spitz separates the myth from the reality, starting with the opening notes of their first album as the band announced itself as a collision of grand artistic ambition and brute primal force, of English folk music and hard-driving African-American blues. Taken together, Led Zeppelin's discography has spent an almost incomprehensible ten-plus years on the album charts; t...he band is notoriously guarded. Spitz brings the band's artistic journey to full and vivid life. He shows that not all the legends are true, but what is true is astonishing, and sometimes disturbing. -- adapted from jacket

Pulitzer Prize-winning journalist De Visé (Andy and Don) offers an extensively researched biography of B.B. King, the immortal King of the Blues. Former New York Times music critic Horowitz investigates the crucial issue why classical music in America has remained white despite Dvorák's Prophecy that a "great and noble" school of American classical music would emerge from the Black music he had heard while visiting America. Edited by novelist Cameron, Solid Ivory ranges from fabled director Ivory's first meeting with work-life partner Ismail Merchant through his memories of Satyajit Ray, Federico Fellini, Vanessa Redgrave, George Cukor, Kenneth Clark, Bruce Chatwin, and Ruth Prawer Jhabvala to his winning the Academy Award at 89 for Call Me by Your Name. Edited by Pulitzer Prize-winning poet Muldoon, who benefited from dozens of interviews with McCartney over five years, The Lyrics presents the definitive texts of 154 McCartney songs with personal commentary; look for an international press conference on Facebook event upon publication. The grandson of Gandhian freedom fighters and immigrant parents, Penn ignored advice to do something practical and, as he chronicles in You Can't Be Serious, became a leading actor; he also served as President Obama's Liaison to Young Americans, Asian Americans and Pacific Islanders, and the Arts (125,000-copy first printing). Readers travel with influential rapper Raekwon the Chef as he ascends FromStaircase to Stage, from performing on Staten Island stairs to cofounding the Wu-Tang Clan to making a platinum solo debut (75,000-copy first printing). Author of the New York Times best-selling The Beatles, Spitz now documents the ferociously successful Led Zeppelin. Copyright 2021 Library Journal.

Spitz (The Beatles; Dylan) adds to his repertoire of music biographies with this account of the dramatic rise and fall of Led Zeppelin from 1968 to 1980. He describes how each member of the foursome (Jimmy Page, Robert Plant, John Paul Jones, and John Bonham) perceived the music of their teens and how they coalesced into a successful unit combining electric blues with rock, that laid the groundwork for heavy metal with their ear-splitting, raucous offerings. Numerous quotes from Led Zeppelin members and their associates lend support; sociological context of their adventures in the U.S. and England sustains the narrative. Spitz describes albums and concert tours in full detail and includes a generous bibliography. Although Spitz can spin a good yarn and keep readers engaged, this book is far too long: it spends inordinate amounts of time on many long-forgotten musicians and chronicling the minutiae of practically every week of the band's whirlwind decade, and Spitz appears to revel in debauchery and excess for their own sake. VERDICT For Led Zeppelin completists only.—Barry Zaslow, Miami Univ. Libs., Oxford, OH Copyright 2021 Library Journal.

Music biographer Spitz (The Beatles) calls on his supreme research and analytical skills to deliver the definitive story of one of the greatest rock groups of the 1970s. While this isn't the first (or second) telling of the Zeppelin saga, it reigns superior to its predecessors with an exhaustive history that never flags in momentum or spirit. To start, Spitz provides a fascinating look at each band member's evolution and their common love of American blues, detailing how the British electric blues boom of the late '60s "laid the groundwork for a musical upheaval" and how guitarist Jimmy Page used the form—and the power of vocalist Robert Plant and bassist John Paul Jones—"as a springboard to something bigger and more dynamic." He gives new insights into each of Zeppelin's eight main recordings, as well as their dynamic live performances, which, he writes, were "comparable with how jazz combos performed, with loose arrangements that depended on synchronicity and intuition." At the same time, he takes an unsparing look at how the band's massive success snowballed into a "heedless hedonism" that led to their decline and disbanding after the alcohol-fueled death of drummer John Bonham. For all the excess and cruelty Spitz recounts, his passion for the band's musical genius will captivate rock enthusiasts. Agent: Sloan Harris, ICM. (Nov.) Copyright 2021 Publishers Weekly.

Separating fact from fiction, which is sometimes astonishing and somethings disturbing, the award-winning biographer brings the band’s artistic journey to full and vivid life, showing how the 60’s become the 70’s, and how innocence became decadence as they took things to an entirely new level. Illustrations.

From the author of the definitive New York Times bestselling history of the Beatles comes the authoritative account of the group many call the greatest rock band of all time, arguably the most successful, and certainly one of the most notoriousRock star. Whatever that term means to you, chances are it owes a debt to Led Zeppelin. No one before or since has lived the dream quite like Jimmy Page, Robert Plant, John Paul Jones, and John Bonham. In Led Zeppelin, Bob Spitz takes their full measure, separating the myth from the reality with his trademark connoisseurship and storytelling flair.From the opening notes of their first album, the band announced itself as something different, a collision of grand artistic ambition and brute primal force, of English folk music and African American blues. That record sold over 10 million copies, and it was just the beginning; Led Zeppelin's albums have sold over 300 million certified copies worldwide, and the dust has never settled. The band is notoriously guarded, and previous books provided more heat than light. But Spitz's authority is undeniable and irresistible. His feel for the atmosphere, the context--the music, the business, the recording studios, the touring life, the whole ecosystem of popular music--is unparalleled. His account of the melding of Page and Jones, the virtuosic London sophisticates, with Plant and Bonham, the wild men from the Midlands, in a scene dominated by the Beatles and the Stones but changing fast, is in itself a revelation. Spitz takes the music seriously and brings the band's artistic journey to full and vivid life.The music, however, is only part of the legend: Led Zeppelin is also the story of how the sixties became the seventies, of how playing clubs became playing stadiums, of how innocence became decadence. Led Zeppelin wasn't the first rock band to let loose on the road, but as with everything else, they took it to an entirely new level. Not all the legends are true, but in Spitz's careful accounting, what is true is astonishing and sometimes disturbing. Led Zeppelin gave no quarter, and neither has Bob Spitz. Led Zeppelin is the full and honest reckoning the band has long awaited, and richly deserves.