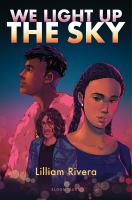 We light up the sky

"Three Latinx teenagers struggle to deal with encounters with an alien, and try to warn the world of the possibility of an alien invasion"--

In a post-pandemic Los Angeles, three Latinx teens witness an alien invasion and struggle over whether to stay safe or fight back. Popular student Luna is still grieving her cousin Tasha, who died from COVID-19. Instagrammer Pedro avoids his abusive uncle by hanging out at a friendly drag bar. New student Rafa lives under an overpass with his tight-knit family. Caught up in their troubles, they miss the lights in the sky and the transforming wildlife until they run into Tasha, alive but decidedly strange. This alien version of Tasha references a coming "renewal," but who can the teens warn when authority figures won't take them seriously? Rivera portrays contemporary teenage life with empathy, using a mix of pop culture and social-justice politics to flesh out her characters. The sci-fi elements are underdeveloped: the aliens are explained in info-dumps, and their purpose, kept vague, unsubtly hints to humanity's inability to care for one another on a macro scale. Still, readers will be curious to see where this fast-paced, action-filled story goes after a twisty cliffhanger ending. Grades 8-11. Copyright 2021 Booklist Reviews.

Three Latinx teens must team up to protect Earth and stop an alien invasion converging on a post-Covid-19 Los Angeles in Rivera's (Never Look Back) thought-provoking, genre-savvy work of speculative fiction. When a cadre of aliens known as the Visitors lands on Earth, Fairfax High students Pedro, Luna, and Rafa barely exist in each other's orbits. Well-dressed Pedro appears self-assured but struggles with a difficult home life; bright and popular Luna carries deep, still-raw grief; and quiet transfer student Rafa tries not to reveal that his family is unhoused. But when one of the Visitors takes on the likeness of Luna's dead cousin, the three must work together to warn their city of the latent alien threat and keep each other safe. Told in the third person and following the three teens' perspectives, Rivera grounds the novel in its setting—a vivid, fully realized alternate version of Los Angeles—and in the precision of her young protagonists' struggles and truths. Sharp social commentary, on-point humor ("I'm not mentally prepared for this part of the dystopia"), and a tender exploration of grief add heart and depth to a novel that's just right for fans of Attack the Block. Ages 13–up. Agent: Eddie Schneider, JABberwocky Literary. (Oct.) Copyright 2021 Publishers Weekly.

Gr 8 Up—Rivera's sci-fi adventure sets aliens upon an issue-ridden Los Angeles. High school students Pedro, Luna, and Rafa are facing their own serious troubles when they're thrown together thanks to a dangerous otherworldly visitor. Luna is grieving the loss of her cousin Tasha, who died two years earlier from COVID-19, when Rafa sees Tasha—or someone like her—near the tent his family is living in. The trio must band together to find out what's happening as they dodge both real and alien troubles. Can they defeat the Visitor? Readers will empathize with the teens, whose POVs draw the audience into their narratives. Luna's grief in particular is palpable as she struggles to move on from Tasha's death, as everyone around her seems to expect her to. The cliff-hanger ending works within the story's framework. Scenes of police violence are woven throughout as the Visitor's stay turns deadly. VERDICT A layered tale of modern-day and sci-fi problems, woven together as a likable teen trio tries to save the day.—Elissa Bongiorno Copyright 2021 School Library Journal.

"Three Latinx teenagers struggle to deal with encounters with an alien, and try to warn the world of the possibility of an alien invasion"--

Should you save a world that doesn't want to save you?Award-winning author Lilliam Rivera explores the haunting story of an alien invasion from the perspective of three Latinx teens.Pedro, Luna, and Rafa may attend Fairfax High School together in Los Angeles, but they run in separate spheres. Pedro is often told that he's “too much” and seeks refuge from his home life in a local drag bar. Luna is pretending to go along with the popular crowd but is still grieving the unexpected passing of her beloved cousin Tasha. Then there's Rafa, the quiet new kid who is hiding the fact that his family is homeless.But Pedro, Luna, and Rafa find themselves thrown together when an extraterrestrial visitor lands in their city and takes the form of Luna's cousin Tasha. As the Visitor causes destruction wherever it goes, the three teens struggle to survive and warn others of what's coming--because this Visitor is only the first of many. But who is their true enemy--this alien, or their fellow humans?Pura Belpré Honor-winning author Lilliam Rivera examines the days before a War of the Worlds-inspired alien invasion in this captivating and chilling new novel.